Share All sharing options for: Introducing Scoop Jardine, Wes Johnson & The Rest Of The Syracuse Orange

Last year Syracuse played the defending National Champion (Kansas) in a preseason tournament with a hostile crowd and came away victorious.  It's deja vu all over again, except this time the Orange should have a bit of a crowd advantage when they take on the No. 2 North Carolina Tar Heels tonight.

First, let's make sure we recap last night's win.  Or as I like to call it, The Night All The College Basketball Experts Jumped Back On The Syracuse Bandwagon.

So...Scoop Jardine was on the front page of ESPN.com last night.  That's crazy. 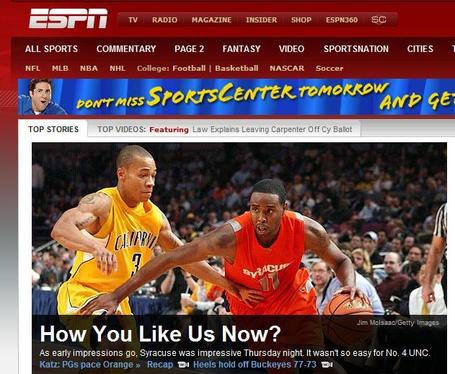 For ‘Cuse, It’s Jardine At The Gard-ine...Cuse Orange

Jardine was pinned to a corner of the Syracuse locker room Thursday night as reporters closed in and asked questions.

"What the hell are they talking to you about, Scoop," he joked.

"I rolled it again and it’s swollen," Rautins said. "I’ll get some treatment for it tonight and (Friday) morning. Hopefully, it’ll be fine."

Before tipoff, [Jonny] Flynn sent a text message to Jardine.

"It really helped me out," Jardine said. "He said 'Let's Goooooo.' I wrote him back and said, 'I got you.' And he said, 'Go show them what you've got.' I played against him for two years. I knew that if I was backing up Jonny or Brandon like I'm doing now, I had to lose weight and work on my shot. Coach Boeheim and Coach Hop didn't lose faith in me. I've got to give them credit for sticking with me.

Wes could be on the brink of having a very exciting all around season for this team. He is gaining a reputation for a strong work ethic, something noted by ESPN's Doris Burke during the game, and is proving to be a smart, steady player on the floor in addition to his terrific athleticism. The funny thing is one of his biggest highlights of the night may even be a play he didn't make in missing a dunk where he soared towards the basket with about 13:00 to go in the first half. Had he connected on that, and he isn't going to miss many of those, we are talking # 1 play on the Sportscenter Top 10 material.

Some video highlights after the jump.