Step Back From The Ledge, Syracuse Fans

Share All sharing options for: Step Back From The Ledge, Syracuse Fans


You've done it, you guys.  You made me post a Third Eye Blind video.  I hope you're happy.

With the cold, hard truth that Syracuse will almost certainly finish in the bottom of the Big East yet again, Syracuse fans seem to have officially lifted the veil of safety placed on Doug Marrone last December.  Despite the fact that, if grilled, most Syracuse would have said they expected a three or four-win 2009 season, a three or four win season no longer appeases the masses.

It's understandable. Expectations were raised early with a close game against Minnesota and an emotional win over Northwestern.  But as the season wore on, the talent level was exposed, the Big East revealed itself to be much tougher than expected and a flurry of injuries, quitters and suspensions gnawed the roster down to the bone. All that said the Orange still should have beaten Louisville this past Saturday and therein lies the rub.

Not to say Doug Marrone hasn't brought some of this on himself.  His uber-questionable decision to punt to Trent Guy late in the game looks bad. His clock management skills have been iffy to say the least.  His special teams unit continues to cause problems for the rest of the team.  His devotion to starting QB Greg Paulus borders on suspect.  Yes, we've heard, Paulus is the all-time SU completion percentage leader.  Well guess what, he's throwing slants all day and doesn't pass the ball father than eight yards down the field at a time, I would hope so. Marrone's unwavering dedication to Paulus as the only way to win games also throws into question how he feels about Ryan Nassib, he of multiple packages.

To take a step back though...being a head football coach on a college or professional level is hard.  Really hard.  Look at Bill Belichick, arguably the best in the game at any level and he spent the last two days getting hammered by everyone. And that's a guy who's got enough experience to back it up.  Doug Marrone only has 10 games to look to for his own experience. Yeah he's worked closely with other head coaches but watching and doing are two totally different things.  Being the guy who suggests the gutsy call and being the guy to make that call and bear the brunt of the consequences are completely different.  And when you're learning on the job with a team that, quite frankly, lacks the talent of a USC, Cincinnati or even a UConn, it's a recipe for hard knocks.

It's really, really hard to be a Syracuse football fan and maintain perspective.  I know.  I watch the games and openly question what's happening. I get worked up over bad played and dumb decisions.  I demand personnel changes and I want wins RIGHT NOW. After the last four years I'm sick and tired of it.  I know you are too.

There is no doubt in my mind Doug Marrone feels the same way.  Remember, he's a Syracuse fan too.  Based on everything we know about the guy, he's going to take what he's learned this year and apply it.  He won't make the same mistakes.  He'll keep recruiting the players he knows will be there for him, to bust their asses and not quit on him when it gets tough.  He's improve his game management.  He'll get better and so will the Orange.

Someone said the other day that next year's schedule is going to even harder than this years and from what I can tell that's not true at all.  Yes, some of the Big East teams will remain good and the Orange will face the better ones on the road.  But we'll also get very winnable home games (Louisville, UConn) and our OOC schedule does not look daunting at all (Maine, at Washington, at Akron, Boston College, TBD).  Fill in that TBD with something creampuffy and, assuming improvement or at least a stronger grasp on the fundamentals, and I'm going to assume we will be in a very good place next year.

We just have to get there.  I'm not writing off the last two games of the year.  I want to win them.  I want to screw up Rutgers and I want to beat the pants off UConn.  In theory, these should be two of our biggest rivals now. As much as I'm keeping an eye on what's going on now, I'm keeping the other one next year, which looks a little better than the one before it.

Patience.  It's a lot to ask at this point.  But it's still something to remember.

The good news (for a lot of reasons) is that Syracuse has only two games left in its season...Bud Poliquin

Bad snap and not the hold led to missed extra point by Orange...Donnie Webb 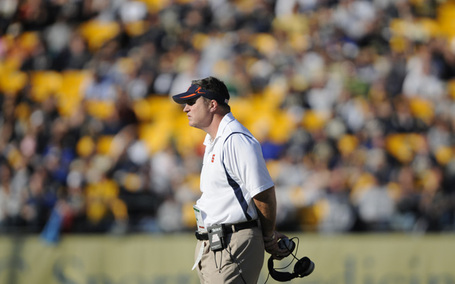