The Quest For Toronto - Fin

Share All sharing options for: The Quest For Toronto - Fin The 2009 Quest for Toronto is over.  The Syracuse Orange have been eliminated from bowl contention.  Two other teams will play in the International Bowl on January 2nd.  The Big East will end its affiliation with the International Bowl after this season, which means that in all likelihood, the Orange will never get the chance to taste the maple syrup-y nectar of championship from the fountains deep within the walls of the Rogers Centre.

The Quest for Toronto will forever go unaccomplished. 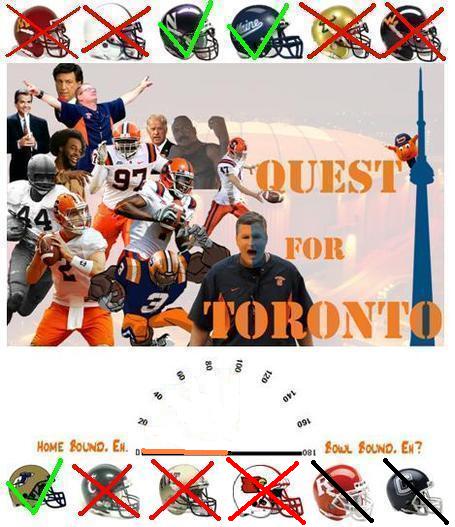 They say that it is not the destination but the journey that truly matters.  I say nay to that.  Cause the journey hasn't been all that fun to be honest with you.  So the destination would have been the perfect explanation as to why we had to make such a painfully, awful journey.  Philosophers are liars.

So what is to become of the Quest?  Is it now a Quest For The Bronx?  A Quest For Birmingham, Alabama?  St. Petersburgm Florida?  None of them seem to feel quite as good.  Football was made to played at an indoor stadium in Canada in front of 17,000 disinterested people at noon.  That's America to me.

We'll move forward, we always do.  We're Syracuse fans, we're used to this.  But for the first time in a long time, the road ahead has no destination.  Southern bowl games.  Big East titles.  BCS Championships.  All possible in the future.  But there will always be a piece missing. Much like the Science & Nature wedge in a Trivial Pursuit player wheel, we'll keep rolling again but we'll never be able to correctly answer that one.