Eric Devendorf In The Holy Land, What Could Possibly Go Wrong?

Share All sharing options for: Eric Devendorf In The Holy Land, What Could Possibly Go Wrong?

No one has officially written it yet but during tonight's Syracuse-Robert Morris broadcast, the announcers mentioned that Devo, who was in the house, will be leaving shortly to play professional basketball in Israel. Hopefully he's got some Matisyahu in his iPod now to get ready.

That's right, there's an outside chance that the Israeli-Palestinian Conflict could be ended by Eric Devendorf.  Pretty decent chance, actually.  But you know, he's gonna have to get one of those tattoos updated... 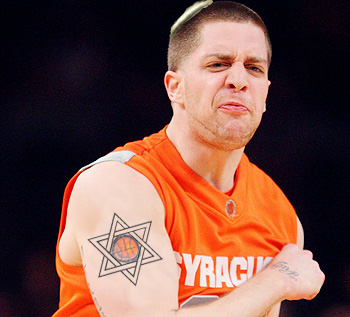 No word yet on which team he'll be playing for but he'll be the best former Syracuse player to dribble in the Holy Land since Terrence Roberts.

For his and Jeremy Tyler's sake, let's hope he's not going to play for Maccabi Haifa.  More details as they come in.