The Quest For Toronto - Week Ten

Share All sharing options for: The Quest For Toronto - Week Ten At 3-6, the Orange are officially out of 2nd chances.  Three more wins needed to become bowl eligible and only three games left.

Need some motivation, Syracuse?  Bud Poliquin made a note the other day that Rutgers and Temple, both of whom will go bowling this year, are laughing at the Syracuse program that used to shellac the inside of the Dome with their innards (too much?). Then I happened to come across these 2009-2010 bowl game predictions today and who do I see squaring off in the International Bowl, the destination we so desperately crave?

My immediate reaction upon reading this?

This aggression will not stand! I will not sit idly by while these two should-be doormats play in OUR bowl game. 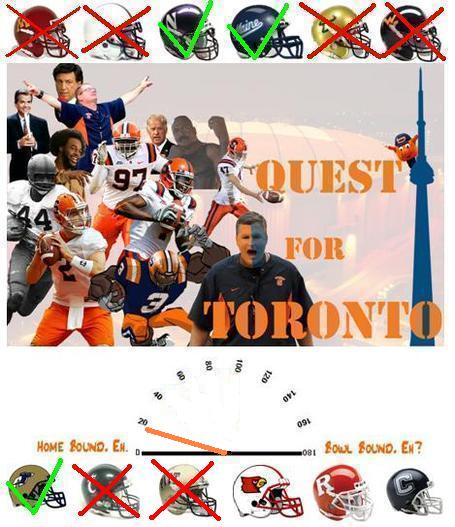 Yes, the Quest-O-Meter is as low as it's been all year and it teeters on the brink of failure.  But I submit to you two quotes from practice today.  One from WR Donte Davis and one from DL Anthony "Psycho" Perkins on what it would mean to go to a bowl game this year.  If these don't keep your bowl-eligible fire stoked then you best join 98% of the SU student population and jump off the bandwagon now.

It would be a dream come true and something I watched ever since I was a little kid seeing the guys get to the bowls from Syracuse and not just for me,  it would be great for the city and for the school itself and I think it would rejuvenate the fans and especially the student body to be, alright the team is back , it’s OK to don Syracuse stuff and come to the game and hopefully people will not just say thank God basketball season is here,  they realize there is still a little bit of football left in us.