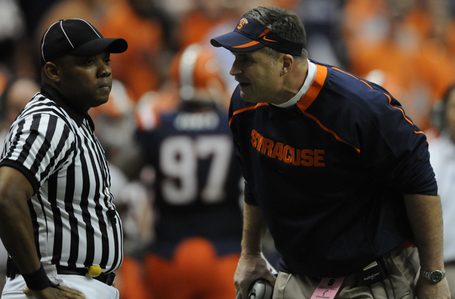 Syracuse, NY (Sports Network) - Zach Collaros threw for 295 yards and four touchdowns in place of Tony Pike, as fifth-ranked Cincinnati earned a 28-7 win over Syracuse in a Big East matchup at the Carrier Dome.

Collaros completed 22-of-28 passes, while Armon Binns had five grabs for 138 yards a a pair of scores for Cincinnati (8-0, 4-0 Big East), which was able to build off a convincing 41-10 victory over Louisville last weekend. The Bearcats, who were without Pike for a second straight game while he recuperates from left forearm surgery, are off to their best start since 1954.

Kazeem Alli and Adrien Robinson also pulled in a touchdown catch apiece for Cincinnati, which extended its winning streak to 14-straight regular-season games dating back to last season.

"Just a recap of the game, obviously we knew all week coming in here that if we did not match the level of intensity that Syracuse plays with this year, then we'd be in trouble, Cincinnati head coach Brian Kelly said. "I think Doug (Marrone) has done a terrific job of teaching his football players to play hard. That was my concern all week. We banged that drum as hard as we could. I thought we came in and it was business-like in a sense. We got our job done and we want to get the heck out of here."

Greg Paulus completed 12-of-17 throws for 85 yards with a TD and an interception for Syracuse (3-5, 0-3), which defeated Akron, 28-14, last weekend in non-conference play. The Orange have dropped three of their last four. Delone Carter rushed for 50 yards on 19 touches, but fumbled late in the third quarter with the Orange in the red zone. Cody Catalina had a pair of catches for 26 yards and a touchdown catch.

"(We had) A lot of opportunities during the game," Syracuse head coach Marrone said. "We went down in the red zone and turned the ball over twice. At the end of the day, we're not a good enough football team to not execute at a very high level and stay in a game or be able to win a game against the No. 5 team in the country. We still have a lot of work to do as far as our procedures and not giving up turnovers, whether it's on the ground or an interception, or whether it's procedures as far as holding or jumping offside."

Mike Williams returned to the field after serving a one-game suspension last weekend against Akron for violating team rules and had four catches for 34 yards.

Cincinnati put up the first points of the game on its opening drive. Facing a 3rd-and-11 from its own 19, Collaros escaped pressure and flipped a short pass to Binns on the far side of the field and he took it the distance for an 81- yard touchdown.

The Orange answered right back on their next possession when Paulus hit a wide open Catalina in the back of the end zone for a nine-yard score with just over four minutes to play in the quarter.

Collaros fumbled a snap on a field-goal attempt early in the second period, but gathered himself and tossed a 16-yard strike to Alli in the end zone for a 14-7 Bearcats lead.

With Syracuse driving late in the second quarter and with a 1st-and-goal on the Cincinnati eight, Paulus was picked off by Drew Frey in the end zone. The Bearcats attempted to tack on three more in the closing seconds of the half, but Jake Rogers' 43-yard effort was off the mark and it remained 14-7 heading into the break.

Collaros found Binns in the back of the end zone for a 13-yard score to put the finishing touches on a seven-play, 60-yard drive early in the third quarter to make it a 21-7 game.

Carter fumbled with the Orange in the red zone at the Cincinnati seven in the later stages of the third, but the visitors were unable to capitalize on the miscue and were forced to punt.

Another Collaros TD toss, this time to Robinson with a little under 10 minutes remaining in the game made it 28-7, which would be the final points of the day.

Cincinnati will host Connecticut on November 7, while Syracuse plays at Pittsburgh next Saturday...Cincinnati improved to 6-4 over Syracuse in the all-time series, with the Bearcats winning the last five encounters, including a 30-10 decision last season...Isaiah Pead rushed for 77 yards on 16 carries for the Bearcats.