Get Your Hands On Jim Brown's Helmet

Share All sharing options for: Get Your Hands On Jim Brown's Helmet

It was one of Brown's most memorable performances. And, it turns out, the basis for one very extremely valuable piece of sports memorabilia that's up for auction.  His game-worn helmet from that day.

To sports memorabilia collectors, this magnificent piece equates to nothing short of an important and historic archaeological find, it is the holy grail of football helmets. Especially considering that no other game worn Jim Brown helmet, collegiate or pro, has ever surfaced or been made available before.

The helmet was originally given to the father of a young Syracuse family by a close friend of former SU Head Coach Ben Schwartzwalder shortly after the 1956/57 season. It was a gift to an expectant father, who put it away for his newly expected son, that turned out to be his newly unexpected bouncing baby girl. The helmet stayed tucked away where it remained for 45 years until the daughter, now caring for her elderly father, discovered it just where he had put it more than four decades earlier.

An important and historic archaeological find!  You'll be like the Indiana Jones of Syracuse Football memorabilia in his latest swashbuckling adventure, Indiana Jones and The Temple Protector of Brown. 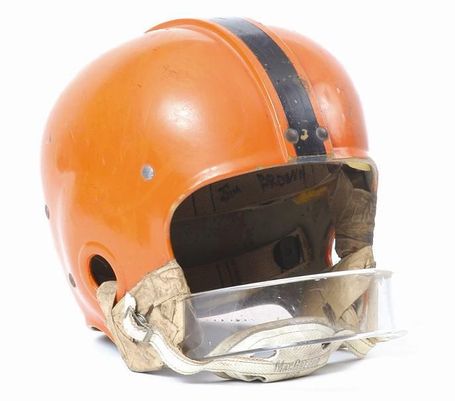 You might want to check around the house for any loose change because the bidding began at $25,000. So, you know, cut down on the Starbucks runs for a while.  Pinch some pennies.  You'll get there.  And know that there's already a bid in so...hop to it.