Syracuse Students Officially Out Of Excuses

Share All sharing options for: Syracuse Students Officially Out Of Excuses

As soon as Syracuse students step back from the ledge after finding out that there will be classes on the day of MayFestt (Worst. MayFest.  Ever.), they'll be pleased to know that every single student who shows up for Saturday's game against No. Cincinnati will get in FREE. 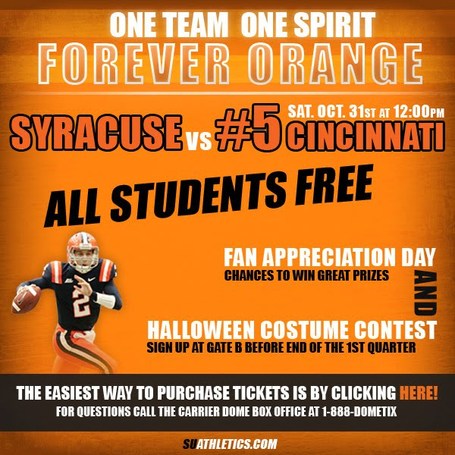 You hear me?  Free.  All your hopes and dreams.  Every prayer answered.  Finally.  But guess what that means?

You're shit out of excuses, buddy.

If I see so much as a hint of silver on Saturday I am personally flying to Syracuse (via JetBlue so I can watch movies), obtaining a list of every SU student who attended the game, cross-referencing said list against the entire undergraduate population, circling the names of every student who did not attend the game, going to their respective dorm/apartment/off-campus-house, asking them to step outside and turn their back to me and proceeding to punch each and every one of them in the scapula and then handing them an invoice (payable within 30 days) for all of my travel expenses.

This is not to mention the $10 Twitter offer that SU Athletics also put out there today for any fans on the fence about attending.  The message is clear...SU wants to pack the ever-loving crap out of the Dome this Saturday.  It's a nationally-televised game against one of the top teams in the nation.  This game will be shown all over...we do NOT want to show them empty seats.  DO NOT WANT.

AND there's a Halloween Costume contest.  So, ladies, that means that your Sexy Nurse or Sexy Maid or Sexy Cat or whatever Sexy outfit you're planning on wearing Saturday can now earn you more than just syphilis from some guy at Omega Tau (is that a real frat?  I have no idea).

That one's free SU Marketing Department.  Next one will cost you.