Syracuse Students Wear Their Finest Silver To The Game

Share All sharing options for: Syracuse Students Wear Their Finest Silver To The Game

When the announcement was made that the attendance for Saturday's game in the Dome was 40,144, a snicker rose up in the press box, on Twitter and amongst those on hand for the game.  The chances that was accurate were minute and all anyone had to do was look around to see that 35K might have been more believable...and even then...

But there was one empty section in particular that folks noticed in the mostly-silver crowd.  The student section.  Or more specifically, the gaping hole of emptiness where the student section should be. 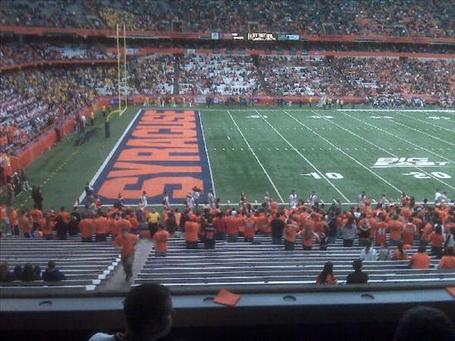 Images like this set off a spirited discussion on Twitter and around the Intertubes during the game, chiefly...what the hell is wrong with the Syracuse students?

First off, we should commend the Syracuse students who DID attend.  Not that attending a Division 1 football game at your university should be considered special but your fandom and support goes a long way.  In a year or two when the rest of thm jump on the bandwagon we'll look to you to lead the way.

(Except for the key jingle thing.  I mean, I'm not as anti-key jingle as many are out there.  I'm just happy you guys are paying attention.  And not doing the wave.  But if I had my choice, I would choose for you to not do the key jingle.  I would choose for you to clap.  Or yell.  Or stomp your feet.  Or jump up and down.  Or some combination of any of those things.  So, in conclusion...whatever.)

As for the rest of the student population...oy.  NOW, I did speak with a few students who shared their explanations and lucid arguments as to why SU students wouldn't show up.  Ticket prices, four years of futility, so many home games in a row, late Friday night frat parties and noon game start-times.  I understand all of those arguments.  They are rational.  They make sense.

Maybe it's just me.  I grew up a fan of college football.  But more than that, I grew up a fan of sports.  When I decided where I wanted to go to college and although Syracuse's athletics programs weren't a deciding factor, they were an extremely welcome bonus.  Once there, it never occurred to me to NOT go to a Syracuse football game.

Obviously, I'm one person and was one student.  But I met a lot of other students during my time there.  And we had no problem filling up the student section when I was there.  Not a problem at all.  Packed the sucker.  To the point where it was a fire hazard.  Sure this was the McNabb years but it's not like every game was an epic showdown.  There were plenty of crappy Rutgers games and crappy Temple games and crappy MAC school games.   And yet we will went.

Why?  Cause that's what you do.  You go to a college with a prominent football program, regardless of how things were last year or the year before that.  You wake up early on Saturday.  You dust off your hangover by cracking open a beer at 9 a.m. You go outside in 30 degree weather and fire up the grill for a delicious and highly un-nutricious meat breakfast.  You put on your dirty SU t-shirt or jersey.  You put your beer in a red cup and head out towards the Dome. You cross the quad while the band plays and other fans shuffle by.  You squeeze your way into the Dome and get sucked in through the wind tunnel.  You buy a Dome dog and a beer.  You do the "student ticket-tricker" so you can get ten of your friends next to you in a three-seat radius.  You go nuts when SU runs out on the field.  You act like a screaming buffoon when the TV camera is pointed at you.  You die on every bad play, you're reborn with every good one.  You stick with the team as long as you can.  You leave only when the game is over or completely out-of-hand.  You go home and pass out.

This is what you do.

If you went to Montclair State or NJIT or Roger Williams College or Scranton University or NYU or LeMoyne College or any of the thousands of colleges and universities that do not have bigtime college football programs, then perhaps you do something productive with your Saturdays like studying or quilting or Meals on Wheels.  But that's not you.  You go to Syracuse.  You go to the Dome on Saturdays.  You wear Orange and you yell obscenities at our opponent and their cheerleaders for three hours until the clock hits triple zeroes.  End of discussion.

I know this is just me bloviating.  The response I'm sure will be "how can I get fired up for this program after the last four years?"  My response to you is "How could you not?"

Stop being so short-sighted.  You have the rest of your life to be a cynical "realist."  There's absolutely no reason to start all that crap in college.

The Greg Robinson Era is over.  This is a new time.  Yeah we got our asses kicked this weekend and by South Florida last weekend.  Guess what, we should have.  They have better talent.  So did Penn State.    Yeah we're 2-4.  And we're probably going to finish around 4-8 this year.  So what?  Next year we're going to be 6-6.  The year after that?  8-4.  Oh, THEN you'll come by on Saturdays and grace us with your presence?  Oh, how thoughtful.

Look, I don't think you're any different than any other fanbase in America.  We like winners.  We don't like losers.  And there's only so long we stick around for losers.  Believe me, I get that and I'm with you.  But how could you not take this as a golden opportunity to be there to root for this team?  They might not win all the time but they bust their asses unlike any Syracuse team in recent memory, surely that evident.  Aside from the West Virginia game this team has stayed in every game they've played into the fourth quarter.  Considering the talent gap and what these guys have been through the last four years, I'd say that grounds for appreciation, if not so much celebration.

I know, who am I to talk?  I'm all the way over here in Los Angeles.  Haven't been to a game since I graduated nine years ago.  Fair enough.  All I know if, when I WAS there, I never missed a game.  Never missed a chance to be a part of the fantastic spectacle that is American college football played at a Division 1 level.

You get a reprieve this weekend and then Akron comes to town.  I'm sure even less folks will show up in the Dome for that one.  Odd since that's probably our last "sure win" of the season, but whatever.  Results required first, then we come back.  It's the way of the sports world all over.

Doesn't make it any more bearable to watch our student section go to waste like that.

Of those who were on hand to witness the West Virginia game and the images they gave us, there is one from inside the Dome that sums things up best.  I like to call it The Fallen Nacho Pile of Greg Paulus.

A sad, broken pile of Dome nachos and salsa laying on the ground in front of the forlorn SU fan who only wanted to taste their sweet, processed Mexican flavors once more.  Instead, the corn chips sit on the concrete floor, to be eaten nevermore.  Never a truer metaphor for Syracuse football on Saturday was possible. Incidentally those are, er, were, Orange 44 correspondent John Brennan's nachos