Finally, A Collectible That Combines Your Love For All Things London Monarchs With All Things Syracuse

Share All sharing options for: Finally, A Collectible That Combines Your Love For All Things London Monarchs With All Things Syracuse

Killer eBay find by the Three Idiots on Sports.  If you truly want to show your support for new head coach Doug Marrone, then surely you'll want to own a piece of Marrone memorabilia like his rookie card!!! 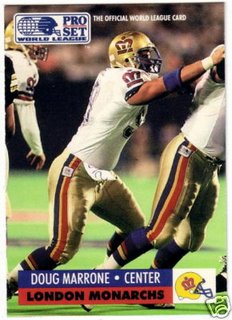 That's Doug in 1991 with your favorite London-based American football team.  Hmm...wonder how the Monarchs are doing now...oh right.  They did win the World Bowl in '91 though, I have yet to see the World Bowl ring on Doug's finger but I'll keep looking.

What's funny is that Doug had actually already been playing professional football since 1987 with the Miami Dolphins and New Orleans Saints.  How the hell was he a rookie in 1991???  Rookie of the Year must have been a highly-coveted award the first year of the World League.