Orange44 Is An Absolute Magician 19.0

Share All sharing options for: Orange44 Is An Absolute Magician 19.0

Each week Brian at Orange44 and I trade questions about all-things Syracuse. This week it was my turn to ask and below are Brian's thoughts on SU basketball, the Doug Marrone Era and game-day at the Dome.

Syracuse is 14-1 overall and 2-0 in the Big East. The Orange seemed to have moved past this "playing down to the level of their opponent" thing against Seton Hall but it reared its ugly head again against South Florida. Your thoughts on the team as it prepares for a much harder schedule over the next few weeks. 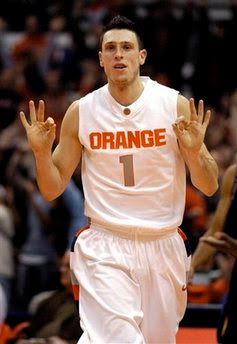 It certainly did not help that Harris was out against USF. I do think that one of the most fun things about this team is that you never know who will have a big night. It could be Onuaku, or Flynn, or Devo, or Andy. It is a very exciting time for Syracuse. Without a doubt I think that now that the Big East is here the whole "playing down" thing is quelled for another year. I would hope by now the team knows that even if you are St. John's you can still beat a ND or Syracuse. I certainly did not get the impression they were dogging it out there against USF, they just were not playing as well as they should have been, and that will happen in college basketball. Do I think Syracuse has the ability to beat UConn and Georgetown? Absolutely. But do I think Syracuse could be embarrassed from them? No doubt. Either is quite possible. Now that is not the likely case for every team in the conference, but it is possible for most. That being said, Pittsburgh does frighten me, especially at The Pete.

Andy Rautins went from being a struggling member of the squad to the consistent scoring leader. What's going on here?

It's about time. Now he is playing like he should have been all along this season. I don't know if it was mental or what in that first part of the season, but now he is shooting like we were all promised and he is finally delivering. Promises were made and promises should be kept. He is doing that now as he is the premier long ball shooter ahead of Flynn and Devendorf. Now, that is not to say Flynn will not be the one that gets the call to hit a game winner, but Andy is certainly hitting some tough shots now consistently and making it look easy. That career performance in the Dome against Coppin State was a treat to watch in person.

How many teams are coming out of the Big East and making the NCAA Tournament? If you had to guess who's in and who's out, who are your choices?

You have to assume that Pittsburgh is an absolute lock at this point. Also, all but guaranteed in will be Syracuse, Marquette, Georgetown, and Notre Dame. More than likely Villanova and UConn are in. West Virginia has been looking good lately. Louisville is on the brink, but they are an enigma at best. So I think it is possible that these ten teams can go. Most likely nine of the ten will go, but that tenth will be hard to get. I think West Virginia and Louisville are the shakiest, but Villanova is not looking great lately. As an outsiders pick, I like Providence so look for them to possibly shake things up, but some crazy upsets have to happen for them to go. Of course, anything can happen in New York City.

Doug Marrone's staff is starting to take shape. Is there anything or anyone you've seen since Marrone took over that makes you feel like next season is going to be a big leap forward? Or is it another year in the depths?

One big piece of the puzzle that makes me more confident by the day is the fact that people actually want to work with this guy, and it genuinely seems like coaches that know him want to send their players to him. I don't think anyone is under the illusion that we are suddenly going to a BCS Bowl next season, but things could get better instantly in a lot of ways. Frankly, it is theoretically possible that because of a new staff and new drills, that the team could actually learn how to defend and tackle, at least better than they did before. That will instantly make the team better. Could it win games? Time will tell. However, two, three, four years down the road with better coaching and techniques that we have seen in recent years, combined with better caliber recruits, much like that Delorean hitting 88mph, we could see some serious shit. I again do not see a completely successful year. I do think a Bowl is still out of reach for one more season, but I do see a couple more than just one win in the conference is genuinely possible. And that, for now, is refreshing enough for me, as it is for probably most of the fed up fans out there. Just being excited is really enough for me right now.

Your thoughts on how the Big East did in the bowl season compared to the other BCS conferences?

I am genuinely disappointed in Pittsburgh and Cincinnati. It's not that I assumed that the Big East would be undefeated in Bowls, but I figured that those two would not be ones that would lose. And really, the four wins are a bit deceiving. The bowl matchups were pretty kind to the Big East. Similarly, they were quite favorable to the Pac-10, although I thought Penn State would have put up more of a fight (that game sucked to watch). Either way, the other games happened about like they should have. The only questionable win was UConn over a Buffalo team that couldn't get a third down. I'm pretty sure Syracuse could have beaten Buffalo that day. Now that would have been a game. West Virginia and Rutgers had great games and great comebacks that were very entertaining to watch, especially that WVU game. And Pittsburgh stunk. Either way, the Big East was represented well as we came in third in win percentage. For being a decidedly down year for the Big East I will gladly take it.

What's your "routine" when you go to the Dome to see a basketball game? Any specific haunts or bars you have to hang out at before or after?

It depends on the day and the start time. For weeknight games at 7:00pm I am usually just in and out. However, for the nooners on Saturdays and Sundays I show up, and then do the postgame thing, usually at some local eatery such as Empire Brewery or Spaghetti Warehouse. Then it is usually some chill out time, watch a little bit of the late game on ESPN, then head to Faegan's. It is a winning formula that has served me well since graduation. If you ever make it back to the east we'll have to convince Axe to ditch the postgame presser and have a "bloggers meeting."

The blogger town hall is in our future, we'll make it happen.  Thanks as usual to Brian for answering the questions and make sure you're checking Orange44 daily.