Orange44 Is An Absolute Magician 20.0

Share All sharing options for: Orange44 Is An Absolute Magician 20.0

You're a Syracuse fan.  You have questions.  You need answers.  Brian from Orange44 is here to help.  Read below for his sage wisdom:

Syracuse basketball is in a much different place today than it was a week ago. In your opinion, what's the biggest problem?

Injuries do not help, but there is something bigger going on than just a couple quality players out.

First and foremost, there is something mental going on with this team. It seems like Flynn overcame this with a superb performance against Providence, but the couple games before this last game he clearly was not mentally with it.

Second is the defense. In both this game and in the L'ville loss opponents found it easy to make quick and long passes behind the last line of the zone and get fairly easy looks at the basket. This should not happen in a good 2-3 Zone defense. Or, at the very least, it should be active enough to collapse on that player, making them have to pass it to a man flashing in the paint. These players that were getting the ball were uncontested most every time in getting to the hoop. That is unacceptable zone defense. 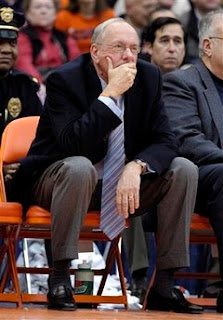 Finally, there has just seemed to be a lack of intensity on the floor at both ends. Maybe the guys were just tired, or maybe something else was going on, such as Onuaku's knee being sore. Who knows? Either way, this team will have to find a way to get up for the big games. They have only done so against Notre Dame. And with UConn, Georgetown, and two against 'Nova remaining, they will need to win some more games against better teams.

If you're coaching this team, what are you doing differently?

I'm going to try and motivate these players more. They need to get their heads back in this and realize that when they are playing well, they can beat any top ten team in the country. They need to realize that no game is easy and every game matters.

Other than that, these kids need to be coached better in what to do when trailing by ten or less in the last two minutes, and which plays to run and when to foul. The Louisville game was tied with two to go, and then Syracuse got behind and looked like they had no clue what to do. Key clutch moments need to be prepared, even if Syracuse is without time outs remaining.

Seventh or eighth. They could get hot and finish fifth or sixth, but I think a two round bye in the BET is just out of reach with other teams playing so well in the league right now. There are certainly easier games remaining with Cincy, St. John's, and Rutgers still on the schedule. But obviously there are scary games left as well. Either way, I think we are just better than everyone thought we were when it is all said and done, and we will probably get a five or six seed in the NCAA Tournament, depending on how we do in New York City.

Of course, this could all change within a week or two.

Doug Marrone is quickly lining up some decent recruits for SU football, your thoughts on the job he's done so far?

Hell yes. I love the fact that we are finally poaching players from other schools. It just goes to show you that he was not lying when he said he kept up with recruiting. They seem, at least from our prospective of the public looking in, like he is doing one hell of a job and seems to have every facet of the program in order, from the recruits he is looking at, to his own staff. You certainly had a feeling when Greg first arrived that at least it was different, but this guy is blowing me away with how much of a coach he really seems to be. That is a HUGE breath of fresh air as compared to Greggers.

What's the big glaring issue Doug is going to have to deal with to really get SU football back on track?

He is going to have to fix this defense. While the offense was still only so-so this past season, the real issue was that the defense could never get a stop when they needed one. Coaching these players to tackle better and actually cover receivers will be tough but very necessary to bring Syracuse back to a position in which they can win close games and actually manage to put down and finish inferior opponents. I don't think anyone could look at the team last year and say… YES, this defense is doing exactly what it is supposed to. If they did, they clearly were drunk, high, or both. While I'm not the biggest proponent of "defense wins championships", it is certainly something we need, and when the defense gets more possessions to the offense, surely more scores will happen by default.

It's almost lacrosse season and the Orange are back near the top of the pre-season rankings. How you feeling about the season?

I feel pretty good. Although we lost the best player in Division 1 due to graduation in Mike Leveille, we still have a loaded team ready to make another deep run. This team is full of quality players starting with Kenny Nims who started every game last season and finished with 34 goals and 24 assists, only second to Leveille. He will look to have his own breakout year and dominate opposing teams. Adding to the firepower will be seniors Greg Niewieroski and #22 Dan Hardy. On defense, senior Sid Smith will take charge in making sure this Syracuse squad will not be easy to score on. After gaining valuable experience in the Final Four, now sophomore goalkeeper John Galloway looks to be even better than last year. And yes, he should be. Additionally, famed OCC transfer Cody Jamieson should add some bonus play. Additionally glue guy Jovan Miller is back for his sophomore season. The most interesting thing to look for will be how Syracuse uses Georgetown transfer Scott Kahoe in the midfield, and if he can become a consistent offensive contributor.

Thanks as always to Brian.  I assume you already check Orange44 regularly but if not, get with it.