Friar Fans: High-Spirited Or Scourge Of The Underbelly?

Share All sharing options for: Friar Fans: High-Spirited Or Scourge Of The Underbelly? 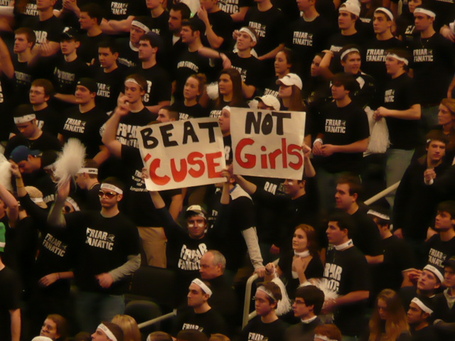 Hey, I'm all for a little taunting.  Let's face it, if a Georgetown or UConn or even a Providence player did something akin to what Eric Devendorf was accused of, we'd probably do something creative about it too.  Be honest about it before you start bashing the PC fans for their "performance" last night.

Of course, you have the right to see it the other way.  Such as Bud Poliquin does:

...the Providence student section was allowed to splat an egg on the glorious canvas with its repeated choreographed chant of a homophobic slur aimed at a Syracuse player. No need to write it out here . . . but understand that in its realm, the two-syllable word used by the PC cretins over and over and over again is as disgusting as the "n" word, another awful two-syllable term, is in its realm.

Now, this was disgraceful on many fronts, not the least of which is that Providence is a Roman Catholic institution that is purportedly above such abominable behavior. Beyond that specific, though, aren't college students supposed to represent some of our finest young people? Isn't college supposed to be a haven, of sorts, for intelligent and informed thought? Aren't colleges supposed to be beacons?

I dunno.  Go to any sporting event, college or pro, and don't those cheers rise up all the time?  You've been following college sports long enough to have seen this before.  Why do I get the feeling you've written this article 38 times already?

Why didn't the school's athletic director, Robert Driscoll, who was in the arena, trot over to the student section and warn those cads in the stands to shut up or leave?

Devo certainly got it the worst, hearing "no means no" amongst other saltier comments.  Such is the price paid when you're a public figure like a college basketball player when you are involved in "situations."  It's been that way since college basketball started and probably long before that.  That said, it doesn't mean Devo's made of teflon:

"He knows he's gonna get that every time we're on the road," said SU center Arinze Onuaku. "You see today that he had, what 27? He doesn't let that affect him. He's just gonna keep on playing."

"He came out and played good," SU forward Paul Harris said. "I don't think it bothered him at all."

Devendorf sat in the SU locker room after the game, his head dropped into his chest, his fingers squeezing his eyes. He declined to comment about what transpired on the Dunkin' Donuts floor. Later he said he just wasn't in the mood to talk.

But maybe the point isn't that Providence fans were mean-spirited, just that they were spirited at all.  Not sure if it's just us or what but we seem to bring out the passion in opposing Big East fans.  Clearly, we are less liked than we might think.  Or is it that we're more respected than we realize?  I mean, after all, the Providence fans stormed the court after the win.  You don't do that unless it really means something to you.