To prepare for tonight's important match-up against the Providence Friars, I figured it was best to go right to the source.  When Keno Davis didn't return my calls, I spoke with David over at Friar Blog.  He posted some answers that I provided regarding Paul Harris' afro and other topics and below are his answers to my questions.  Hopefully, they bring us one step closer to understanding the inhabitants of The Dunk.

Which Zooperstar are you most looking forward to seeing at the game? 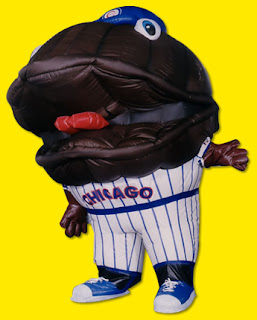 Give me the one player who will put the fear of God into SU fans.

The fear of God, or God Shammgod? Geoff McDermott has been the favorite target for Friar fans to rag on over the past few years. Some of it has been deserving, as McD has not been the offensive player we thought he could be, and he makes a ton of mental mistakes at the worst possible times in games. However, something incredibly important happened in the last few weeks. You see, Geoff came into proximity of Friar legend Marvin Barnes, who basically told him to get his shit together (if you have not seen the "interview" yet, it is a MUST watch. Since absorbing Barnes' like Peter Petrelli, McDermott has been "layin' some elbows" and pulling down a crapload of rebounds -- a major weakness of Syracuse. So while Jeff Xavier, Weyinmi Efejuku, Sharaud Curry, and Marshon Brooks are spreading out their scoring by shooting over the zone, McDermott will be doing the dirty work by getting them second chances and limiting Syracuse's.

How's that Keno Davis working for you?

So far I'm thrilled with what I've seen from Keno. My first year on PC's campus (and of Friar fandom) coincided with Tim Welsh's first of ten year reign -- so it's all I really knew. Winning 1 BET game felt like winning the national championship (they've only won ONE BIG EAST Tourney game in the TEN F'ING YEARS I've been following). The team just needed a change of culture, a fresh start.

So far, it seems like Keno has a plan that will lead the Friars in the right direction. Davis is in a weird situation this year though. If PC does well, it's because Tim Welsh left him with a veteran roster. If they suck ass, it's because he doesn't have the right type of players to properly fit his system. We will all know if he is the real deal in the next few years, since he is bringing in HALF of a new team next year. From what I've been hearing and reading about the new recruits coming in, it should definitely be an exciting time in Friartown.

Not if you ask anyone in the media, who have all been quick to point out that Providence hasn't beat anyone of note. While its definitely true, I'm still encouraged with their road wins so far. Over the last three seasons, the Friars have only won two road games each year -- which they have already matched. The team is getting confident, and there are plenty of opportunities to get big wins the rest of the season. It all starts with this home game tonight. If they lose, I will have almost zero faith that we can beat any of the "Top 9" teams (um, except maybe Notre Dame, because they just blow). A win....well, I think everyone would have to start taking us seriously.

My gut feeling, and I hope I'm incredibly wrong, is that the team falls painfully short of a bid. It'll be a shame, because I really like this group of kids, and it would be their last shot for the tournament in their PC career. Its just an unlucky year to have a pretty decent team in this conference.

What kind of a crowd are you expecting to see at the game? Should SU fans on hand be worried about getting "Blacked-out?" 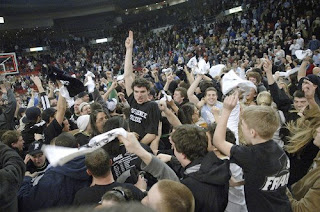 This is honestly one of the biggest games for us since...10 days ago against Marquette. I'm not trying to be a dick or anything...I just feel like we haven't had many relevant games since our home matchup against Pitt in 2004 that was for 1st place in the conference (in which we got walloped, and ultimately deRAILED the rest of the season). To have two big games at home within two weeks of each other is just unprecedented for me. I guess that's just life in the BIG EAST this year.The Providence crowd should be in absolute full force (the Marquette game was during the tail end of semester break), and the Syracuse crowd should just be counting their lucky stars its not a 9PM start -- That Rhode Island IPA they sell at a nearby bar is downright deadly, trust me. The only thing that can potentially keep away the fans is the snow or that pesky "wintry mix" that is supposed to hit the city.

To be honest though, I'm not sure if the "Black-out" is going to be much of a factor. I'm sure the student section will be rowdy and all dressed in black, but I don't think the Black out was an official thing or really publicized by the athletic department. It's a damn shame, I tell ya.

I've been strangely confident all week, even before the news of every single Syracuse player suffering a somewhat serious injury (I heard Boeheim re-injured his hand that he hurt swatting that poor microphone?). I say PC 71, Syracuse 65. Best of luck! Note: As soon as this is posted, we are officially not blogger friends for the next 24 hours.

Noted. Thank you for taking the time to answer my questions. Now I hate you. You and your ass face.