I thought I was out.  I thought I had gotten away.  Turns out...they knew where I was the whole time.

It was the wife's birthday over the weekend and I took her for a nice little getaway along California's beautiful Central Coast.  While you were worrying about that layer of frost on your windsield, I was just hoping the rain would hold off so we could go hot tubbing.  I am fine with my choice of living location.

It was a fantastic weekend, full of mineral spas, beach sunsets and warm goat cheese appetizers.  Most of all, it was a detox from the emotional roller-coaster that is Syracuse basketball.  Even with the game coming up on Sunday I was unplugged and I was fine with it.  Whereas my wife was getting away from the hectic hustle and bustle of daily life, I was getting away from the fretting and worrying about whether or not Syracuse was really worthy of its high ranking and ultimately worthy of it's place among the elite of the conference.  I didn't want that feeling I had the previous couple seasons to creep back in, that our place at the top wasn't secure and we would have to fight and claw all season long just to keep pace.  It was all out of my mind.

Then, Sunday morning, I sat down to breakfast.  And just like U.S. Customs Agent Kujon realized when he peered at the bottom of his ceramic coffee cup, I too came to the conclusions that everything I had told myself up until now was just what I wanted to hear: 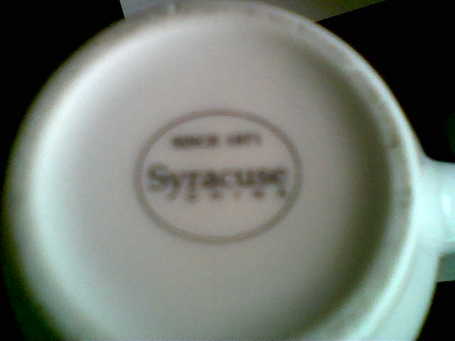 The greatest trick Syracuse basketball ever pulled was convincing me, for a weekend, that it didn't exist.

I knew we were going to lose to Louisville.  Is that lame to say after the fact?  I knew it the moment we lost to Pittsburgh.  Something about the game just felt wrong.  With the road losses mounting, Big East home games are now must-wins and SU doesn't do must-win very well, especially in the middle of the season.  I thought maybe I was basing this too much on previous season results but I couldn't shake the thought that it felt like an impending loss.  And I was kinda glad I wouldn't be here for it.

And so...Louisville 67, Syracuse 57.  I'm learning as I go here but it sounds like it came down to three-pointers and not being able to break the press.  And when the other team is making threes, we don't win.  It's that simple.  It's science.

I'll leave it to others better suited to run down things but if I'm right, and I usually am, everyone's probably freaking out right about now.  Right?

Bud looks for answers to SU's first losing streak of the season...Bud Poliquin

The brutal Big East scheduling is chewing up the Orange...AP

And getting dominated on the boards certainly didn't help either...Donna & Mike

SU coach Jim Boeheim relayed no information about Rautins in his post-game news conference. SU players said they believed Rautins had twisted his ankle, though nobody knew just how serious the injury was.

Paul Harris reported seeing Rautins on crutches in the SU trainer's room. The official diagnosis from SU spokesman Pete Moore was an ankle sprain. Moore said the SU staff would know more today about the severity of the sprain.

The SU offense was stifled in the second half...Daily Orange

Sorry SU, the Top Ten's just not that into you...Cuse Country

Is this SU team who we thought they were?...Three Idiots on Sports

Syracuse is not an elite team...Bleacher Report

Recap and interviews with the players...Palestra.net