Much to HoyaSuxa's surprise, there's an Orange-Out coming up.  Yep, February 14th against Georgetown.  Surprised you haven't heard about it.

Big ups to Alex O. (the kids still give Big Ups, right?) for spotting the official T-shirt of the venture: 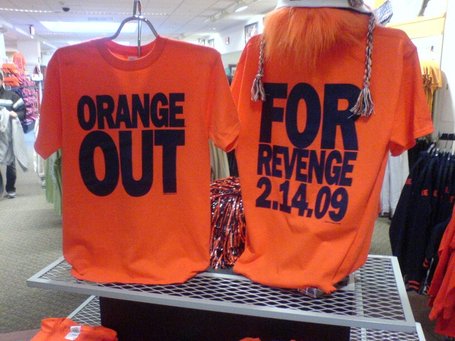 I know Alex isn't too thrilled with the development as its a blatant attempt by SU to cash in on the event. But...did you expect anything less?  And it's not like you HAVE TO buy that shirt to be a part of it.  Hell, take a white shirt and smother it in orange paint for all we care. (Give it a few days to dry.  And don't attempt it while you're wearing the shirt.)

The more important issue that seems to be coming to a head is, as I see it...if we beat Georgetown are we going to storm the court?

I think we are.

And as much as I'm the "have fun you crazy kids" guy, I don't think that would be a good thing in this instance.  I'm sure it will be discussed further below...