Call Us The Home Warriors

Share All sharing options for: Call Us The Home Warriors 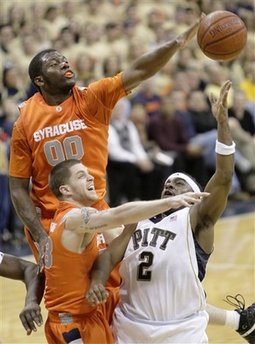 Devo...the ball's up there, chief.  A metaphor for the game perhaps?

Only two Orange score in double-figures (Rautins 17 and Flynn 12), no Orangemen grab double-digit rebounds and only six guys on the entire team score a basket.  Of course, only six guys played more than five minutes.  Flynn shoots 3-14, Arinze goes 0-5 from the line, Devo takes four shots all night  I didn't think those kind of numbers were possible with this team.

Maybe the Orange just ran into Pitt at the wrong time...following the loss than dropped them from #1.  And it certainly didn't help to be on the road at the same time.  But we're gonna have to learn how to win big games away from the Dome eventually, especially in the Big East.  We don't want to be THAT team.

Syracuse.com has their wrap, more to come tomorrow.