Share All sharing options for: Mothers Who Are In Fact Hoyas Will Be Recognized As Such Tonight

Donna Ditota says the Orange are ready to crank it up tonight.  Jonny Flynn concurs...

"Coach Boeheim always tells us to play the game like we're playing a top team every time out," Flynn said. "To me, these first four Big East games were way harder than these next four because you're playing against what they like to call the bottom-dwellers of the Big East, which are the teams that can come up and sneak you.

"Those are really hard games to get up for. But these next four, we're going to already be up for them. ESPN games, rivalry games and things like that. I think the first four games are going to be harder than the next four."

Probably shouldn't show that "bottom-dweller" quote to any of those teams, especially since we play some of them again.

The game might come down to how the Orange can contain star DaJuan Summers.

The Orange will face one of the premier forwards in the league in Summers, who at 6-foot-8 can step out and shoot the perimeter shot, or bang in the lane. Onuaku, who grew up near Washington, D.C., remembers Summers (a Baltimore native) from their high school days. Onuaku said Summers has matured into the player the Hoyas always believed they had.

"He's a pro," Flynn said. "That's all I can say. He's a pro basketball player. He has a nice midrange shot. He can go in and dunk on you. He plays with a lot of energy for the Georgetown team and that's good. Him being the veteran on the team, his role is a lot larger than last year when you had Roy Hibbert and Jonathan Wallace. So he's taking more of the leadership role, and his team is doing pretty well."

Mike Water has his scouting report ready.  Front and center will be...the centers. Speaking of here's a statline for Arinze Onuaku that's worth following:

Arinze Onuaku has made 94 of his 133 field-goal attempts this season for a 70.7 shooting percentage. The Syracuse record for field-goal percentage in a single season is held by Roosevelt Bouie, who hit 65.4 percent in 1979-80.

Georgetown's Jessie Sapp and his backcourt teammates are going to have to step it up if they want any chance of making an impact against the Orange.  They're 7 of 32 from three-point range in their last three games.

The "vacation" is over for the Orange, says the D.O.

CollegeHoopsNet has their preview of the game, including a prediction of a Cuse victory.

CuseOrange previews the match-up, which begins the Big East Gauntlet for SU.

The Washington Times wonders what solution the Hoyas will try to come up with to best the Orange.

ESPN Classic will be airing a 1985 Syracuse - Georgetown game at 6pm EST.  I won't spoil it for you.

John Thompson II said earlier this week that Georgetown needed more "thugs" to make an impact under the boards.  HoyaSuxa went to the trouble of converting their current crop of players into brand new thuggish versions:

Finally, I leave with the thoughts of Dave M., an SU alum who answered HoyaSuxa's call for an Open Mic on SU vs. Georgetown.  Here's a taste but please go read the entire thing...

So for those Syracuse fans who have yet to come around, by all means, continue to hate Connecticut. But recognize Connecticut for what it is: the new kid on the block looking to pick a fight. Connecticut has made its presence known, no doubt, and will continue to be a strong opponent, but there is only one team that worthy of our focus, regardless of the circumstances.

That team is Georgetown.

G'Orange.  And if you're attending the game tonight, make it count.  No one is saying it's gonna to be easy.  But in circumstances like this, you do what you gotta do... 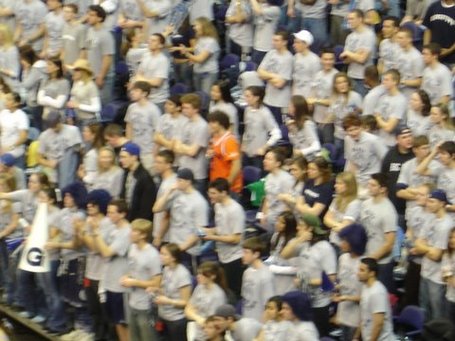