Share All sharing options for: The Express Chugs Home

So judging by those banners that keep showing up on the site, The Express is coming home (ugh).  The DVD and, if you're cool, Blu-Ray disc, come out on January 20th.  You can of course pre-order them at any time, get the DVD here and the Blu-Ray right over here. 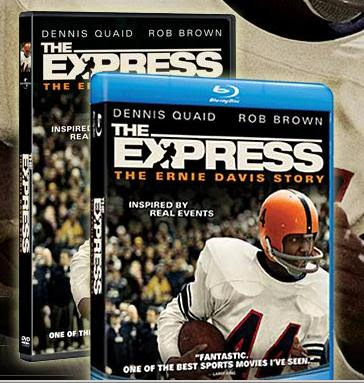 There's nothing I hate more than a DVD release that's barren because they're saving the good stuff for the special edition.  The good thing about this release is that it looks like they loaded up the disc with mucho bonus features.

No idea what BD Live is but it sounds a helluva lot better than a BM Live.  NOT A bonus feature I'd be checking out.

Go forth and spread the word about the DVD release, because judging by the $9M box office take, the theatrical release certainly didn't do a good job of it...