Share All sharing options for: He'll Gladly Pay You Tuesday For A BCS Coaching Job Today

Commentor voteprime pointed out something earlier that I had noticed in passing as well.  I guess I never really stopped to look Skip Holtz over but...he's rather, um, Rubenesque.

I couldn't quite put my finger on it at the time, but his supple frame reminded me of something.  I think I finally got it... 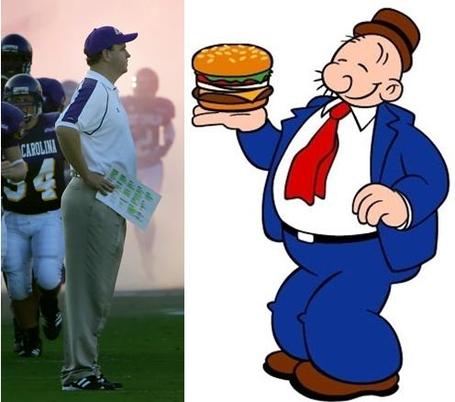 Though I don't think I'll start calling him Wimpy just yet.

Sticking with the speculation that Skip is near the top of our list, East Carolina's Athletic Director Terry Holland is getting a little antsy about things.  He put out an official statement on the school's website to try and quell fears that he's already out the door.  Much like Edward the Longshank's attempt to strike fear into the hearts of many by posting the limbs of William Wallace to the four corners of Britain...it did not have the effect he had intended:

Coach Skip Holtz, along with many of his family members, will be in New York (and so will I) to celebrate the induction of Coach Lou Holtz into the National Football Foundation's College Football Hall of Fame. While we are in New York, I would expect Coach Skip Holtz to have contact with many good football people who will have their own personal opinions on his career options.

However, Coach Holtz does not have interviews scheduled with any institution during this time period and will not schedule any interviews for coaching positions while he is in New York. It is certainly possible that he will rub elbows with or even have a cup of coffee with athletic administrators who have coaching positions open at their institutions. We are in complete agreement that he has no reason to avoid such encounters.

In case you're wondering, yes, DOCTOR Gross will be at that dinner.  Don McPherson is being honored at the same event.

Upon our return to Greenville, we will sit down to discuss whether or not he wishes to consider scheduling interviews concerning open coaching positions. If he indicates he wants to interview with another institution, I will wrap both hands around his throat and throttle him until he agrees to coach at East Carolina for the rest of his life. Well, at least that is what I would do if I thought it would work.

See now, there were times we wanted to wrap both hands around Greg Robinson's throat and throttle him until he agreed to leave and never coach Syracuse again for the rest of his life.  So...we get it.

If Coach Holtz wishes to interview at other institutions, he will schedule the interview with my permission to do so. Coach Holtz and I will have no further comment. I firmly believe that Coach Holtz has earned the support of the Pirate Nation regardless of what his decision may be in this or any other year.

That's his bold font, not mine.  So basically if there's anything you can take from this it's that:

A) Skip Holtz is available.

B) East Carolina is not going to block him from being interviewed, nor do they seem to have any plan for locking him up long-term or naming him chancellor-in-waiting or something like that.

C) Syracuse's song and dance is going to be in full swing next week and you'll probably know pretty quickly whether or not Skip is our guy.