Share All sharing options for: The Schedule By Which SU Lacrosse Will Defend It's National Title Is Here

Drink it in, you guys: 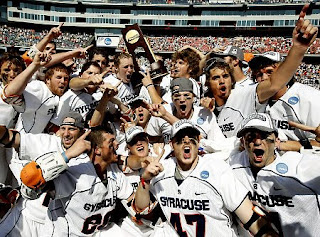 If you notice, SU will play 10 of it's 14 regular season games at home.  I'm fully convinced there aren't actually any standards and practices in college lacrosse.  We really do just do whatever the hell we want, don't we?

Fives teams on the sched made the NCAA Tournet last year (Virginia, Johns Hopkins, Cornell, Loyola and Colgate).  Oh, did I mention Syracuse won that tournament and became the NATIONAL CHAMPION?  Just wanted to keep you in the loop.

SU is still a year away from joining the newly-formed Big East Conference but a couple of it's soon-to-be yearly opponents are on this year's sched.  Providence, Georgetown and Rutgers, as they usually are, are there.  Missing are Villanova, Notre Dame and St. John's, expect to see much more of them in years to come.  Of course that means this could be the last time you see Binghamton, Army or UMass on the schedule for a while.  So savor that...if that's your thing.

Let's do this again: