The Five Most Important Things Syracuse Football Must Do In 2009

Share All sharing options for: The Five Most Important Things Syracuse Football Must Do In 2009

I'm not going to include "hire the greatest coach of all time" considering we already know that's going to happen (RIGHT?).  This is a list about the things the new coach and the SU administration must do in 2009 to bring Syracuse football back from the briny deep.

#1 - Lose The Culture Of Losing

Greg Robinson seems like the kind of guy who walks into a locker room after a 30-point loss and congratulates people for the five things that went well instead of pressing them on the forty-five things that went horribly.  He even said as much in his farewell speech, that he always looks at the positive in things.  I don't have a problem with that per se but Greg lived in a world of denial when it came to how terrible the Syracuse football program has become.  He honestly doesn't believe things are all that bad.  He really does think we're a couple bad breaks away from being 10-2 and playing in the Orange Bowl.

And that kind of thinking and the reinforcement that comes with it has probably been more damaging to the program than anything else in his tenure.

After the 30-10 loss to Northwestern, Arthur Jones couldn't stop talking about all the things that went right in the game.  He was upbeat and made it sound, as Robinson did, like things were gonna turn out fine.  Over the next couple weeks, similar comments would pop up from time to time from the players, reinforcing the fact that these guys had bought in to Greg Robinson's "put on a happy face" mentality.

I'm not trying to say the Orange were content with a 3-9 record this season.  But except for a couple audible exceptions (Curtis Brinkley, Delone Carter), not many of the players seemed terribly pissed off.  SU football has been bad long enough that there isn't a player on the current team who knows what it's like to finish the season with a winning record.  They've become accustom to losing and losing by large amounts.  And the more Greg Robinson made excuses and spoke positively, the more he fed that culture of losing...that it was okay to lose by 30 today because someday in the future, we'll win.  Not sure when, but for now, it's okay to lose.  You'll see.

We never did see.  And we never will until the culture at Syracuse changes.

Syracuse's schedule in 2008 wasn't the reason they went 3-9, but it certainly didn't help matters.  The Orange played the 8th-toughest schedule in the nation and it certainly felt like it at times.  They played two BCS Conference champions (Cincy, Penn State), a 9-win Northwestern team and at least five more bowl-eligible teams, six if Louisville wins this weekend.  Even a mediocre Syracuse team would have had trouble going 6-6 this season.

Part of DOCTOR Gross' referendum for SU football has been upping the ante on scheduling.  He paid off Wyoming to take them off the schedule in 2009 to free up room for higher-profile teams such as the Big Ten's Minnesota.  There's nothing inherently wrong with wanting to play the best.  It helps recruiting and keeps your national profile high.  But when you're doing as badly as SU is doing...would it kill us to take it easy for one season?

Just look at 2011.  Yes, that's three years away and three years is like another lifetime in the world of college football, but chances are fairly decent that the 2011 schedule will still be extremely grueling by time we get there.  You've got perennial power Virginia Tech, Jim Grobe's Wake Forest squad, the always-decent Boston College and USC, who happens to be the most elite of all elite programs in the sport.  I know, SU could be great by then.  We should think positive.  But to be realistic, with that schedule, they better be.

2009 is already shaping up to be a very similar schedule to this season.  Minnesota is a good team again.  Northwestern is back on the schedule, so is Penn State who the Orange will have to face on the road.  Akron is the weakest of the OOC teams on the current schedule, but since the Orange lost to the Zips this season, that's no gimme.  There's one slot open and much like this season, the Orange better schedule easy...be it a 1-AA team or a team in the same boat.

For right now, when it comes to filling slots in the 2009 and 2010 schedule, think MAC/Sun Belt or Army or 1-AA.  There's no reason to stack the deck any more than it already is.

All jokes aside, I have no problem with Mikhail Marinovich and Niko Rechul opening a hookah bar.  I think it's unfair that college football players and athletes in general have restrictions on the kind of jobs they are allowed to have and the money they have at their disposal, especially when I read about how much money the BCS and bowl games bring in to the universities.  I understand the roadblocks standing in the way of paying college athletes so as far as I'm concerned, if you can make some extra bucks doing something legit, why not?

All of that said, there is no reason whatsoever that anyone in the SU administration or on the SU coaching staff should have allowed two of its players...two freshman, no less...to open a tobacco-smoking establishment in the middle of the season.  A losing season, no less.

At the first sniff of this, the players should have been sat down and told they can't do this until the season is over, or at the very least they must remove themselves from the entire process.  Because this reeks of loss of institutional control, not to mention tobacco.  It also sends the message that Syracuse football players have way too much free time on their hands, time they should probably be using to, I don't know, win more football games.

That might not be the truth but perception is reality.  And when people hear that SU football players are opening their own businesses or doing just about anything that doesn't include focusing on football and schoolwork, it sends the message that the inmates are running the asylum.

Even before the season began, when Mike Williams was suspended for cheating (allegedly), it came to light that this wasn't the first time the issue came to light.  As a coach or mentor, knowing that your star player is making bad decisions, how do you allow that situation to happen again?  Mike Williams is his own man, but the system should have been in place to ensure that he never found himself on the outside looking in this season.

I'm not saying we need a stern taskmaster.  There's certainly enough examples of times that doesn't work (Tom Coughlin).  But then again, in this situation it might not be a bad idea.  Someone who sets a tone.  Someone who tells the players their focus is on football and school and nothing else.

#4 - Regardless Of Position, Bring In A Blue Chipper

There's probably no area as dire for Syracuse football than recruiting.  The well has seemingly run dry.  UConn and Rutgers are grabbing recruits from areas we used to rely on.  New York five-star players are looking elsewhere for higher-profile programs.

The next head coach, or at least someone on his staff, needs to be a master recruiter.  This is non-negotiable.   And he needs to make a sudden impact.  Whether that means convincing the stud he's already recruited at his current school to come with him or making one of his first recruits for 2010 a star-in-the-making, he needs to make a splash ASAP.  A message needs to be sent.

The message is...Syracuse football is once again a power in the Northeast.  It starts on the recruiting level.  If you win that, you win more on the field.  Just ask Illinois (Hi Mike Locksley) or UConn (Hi Randy Edsall).

It doesn't even matter if we're talking about a stud QB or instant-playmaking WR.  It could be a LB or a DB or even a kicker.  Do they make five-star kickers?  I don't know.  But if they do, we need one.

And while bringing in a star from New York or one of the surrounding states is fine, bringing one in from somewhere else would be even better.  There would be greater statement than to convince a kid from Florida who can play anywhere to come to Syracuse.  It would be game-changing.

#5 - Whatever The Short-Term Cost, Win Back The Fans 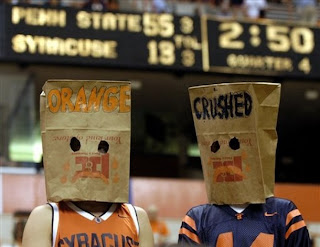 Look, at the end of the day the fans aren't coming back in droves until Syracuse starts winning again.  It's a fact and we should be realistic.  But the only thing more embarrassing than what happened on the field this season was what was happening in the stands surrounding it.  For just about every home game save the Penn State game, the announced attendance was a laughable number every time.  You had to give SU a 5K curve in each game, at least.  Sometimes, much more.

SU Athletics tried...kinda.  They did things like hosting cover band concerts before the games and "Courage Day," where Art Monk was honored at halftime.  And yes, it's certainly well worth it to have someone like Art Monk in the building and associating with the program.  But I think we can all safely say it has no effect on attendance.  And if that's the best you can do, you need to fire your head of marketing ASAP.  (Oh, forgot, she's married to the AD).

My solution...think simple. Plain and simple, it's not worth it for the people of Syracuse to come to the Carrier Dome on a Saturday with the current offer.  So make the offer better.  Someone's not interested in buying two season tickets?  Make it a buy-one-get-one-free season ticket deal.  Sound crazy?  Maybe.  But what's better...two empty full-price seats or two half-price seats with people in them, both of whom are spending money on concessions and merchandise every game?

You're not going to be able to attract people with the on-field product.  So attract them with things off the field.  Create an All-You-Can-Eat section.  Make the Northwestern game "Free Dome Dog Day." Everyone who shows up for the Cincinnati game in an orange shirt gets a $15 gift card for SU merch.  Make the West Virginia game "Everyone Under Ten Enters For Free Day."  Think of all the families you'll get in the Dome for that one.  And think of all the food and merch they'll buy once there.

Don't get cute.  Don't make people but tickets to a crappy game if they want to see a good game.  Just make the crappy game insanely cheap to the point where people have to come cause they'd be crazy not to.

Right now it's about putting butts in the seats and getting rid of all that awful silver we see in the stands during games.  Grab the fans now with amazing deals so that by the time SU football is good again, we'll pay whatever you ask because we want to be a part of it.  Not to say we won't complain then, but we all know the dirty truth that, as long as SU is winning, we'll pay whatever you ask us to.  If you're lucky, that won't be long.