Donnie Webb has a ton of Doug Marrone nuggets in his post today, including Marrone's thoughts on Arthur Jones (""To say I studied him, I'd be lying...I was more concerned about some of the other positions"), how we wants to schedule the currently-available 12th slot in our schedule and how the recruiting trail has been shaping up.

Webb also casually mentions a meeting of the minds so great that it will go down in the annals of time in the same vein of as when James T. Kirk and Jean-Luc Picard met in the NexusLexus and Whoopi Goldberg told them to team up and fight crime.  A meeting that should have been filmed and archived so that future generations could know that it actually happened.

Greg Robinson and Doug Marrone.  One on one.  Face to face.  Mano a mano.

"It was good," Marrone said. "I asked him questions to give me insight into the program. After that, the conversation you'd have to ask Greg. It was between the both of us."

TNIAAM has obtained an exclusive transcript of this meeting.  Many Bothans died to bring us this information:

Greggers: Douglas, how are you?

Dougie: Coach Robinson, it's a pleasure.

Greggers:  I see you changed the wallpaper.

Greggers:  Oh yeah, absolutely, I mean obviously I'd love for the wallpaper to still be solid sheet vinyl but, what is, is...

Dougie:  Right.  Anyway, I thought maybe we could talk a little bit.  I'd love to hear your insight into the program...

Greggers: Did you know Syracuse is located Upstate New York, which is different than New York City?

Greggers: Yeah, see, I didn't know that when I started.  So you're already ahead of the game.

Dougie: I thought maybe we could talk more about the players and what they- 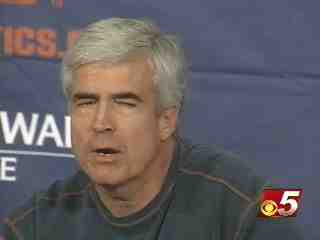 Dougie: In what sense?

Greggers:  They fight the fight.

Greggers:  The Fight.  They fight it.  With their want-to.

Greggers: It's what these guys have it.  They really do.  It's osmosised into them.

Dougie:  Coach, I'm not familiar...are you saying these guys are taking peformance enhancers?

Greggers: What?  No!  Look, I'll put this as plainly as I possibly can...these players fight with their want-to and know that what's not finished isn't done so they want to get started doing instead of not doing.  You understand?

Greggers:  I see you haven't hired a defensive coordinator yet.

Greggers:  Oh great, can I schedule some time with you?

Greggers:  Talk about the DC job.  I've got some fantastic ideas on how to take all of this have-to and snowball it into something fiery.

Dougie:  Coach...do you even know anything football or are you just saying nonsensical, generic motivational phrases?

Greggers: Well, see now...that's what you said.  I don't want to get into all of that.  As soon as I say I don't actually know anything about football the media jumps on that so I'm not gonna...I'm just gonna keep fightin'.

Dougie: Okay Coach, well listen I've got some calls I have to make...

Greggers: I don't watch it.