Even Sportsline Loves Them Some Homoerotic Devo

Share All sharing options for: Even Sportsline Loves Them Some Homoerotic Devo 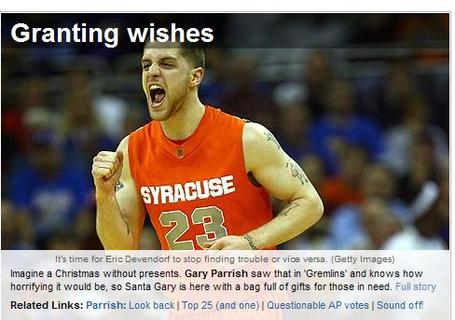 That Eric Devendorf on the front page of CBS Sportsline and it looks like he's hungry for something.  I'm just gonna let you work out if it's a hard-boiled egg, some chipolte fajitas or something else...

While we're here, Gary Parrish, tell us what Syracuse, and specifically Devo, will be looking for under the Christmas tree this year:

I'm OK with a Syracuse University Appeals Board softening Eric Devendorf's suspension to what should amount to two games, but now it's time for the senior guard to realize he's fortunate and return to the team with more focus, both on and off the court. Devendorf was already on probation before last month's incident that resulted in him being accused of hitting a female student in the face. So regardless of whether you believe that happened the way the alleged victim said it happened, I think we can all agree that Devendorf has a unique ability to find trouble, and it's time for that to stop.

Oh and I couldn't help but notice this as a scrolled down a little further...

How can someone rank Memphis but not Syracuse?

But the guy from the San Jose Mercury News did it this week.

That would be Jon Wilner and here's his poll.  Yep, not only was Syracuse not in his Top 25 while Memphis was but 12-1 SU didn't even make his "just missed the cut" list.    Me thinks Jon might need a reminder that the Orange actually still exist so, feel free to leave some comments for him.