Trading One Orange For Another

Share All sharing options for: Trading One Orange For Another

Another day, another football coach.  This time it's Offensive Line Coach and Recruiting Coordinator Greg Adkins.  Coming to us after six seasons with Tennessee, Adkins brings with him the reputation of being a top notch national recruiter.  To which I say...why yes I will have some...

"Greg has been a part of a lot of great programs and he has won championships," Marrone said. "He has recruited the type of players we are going to need to have success on the field in the future. Greg brings a wealth of experience in the offensive line position. I think offensive line is the second most important position beside the offensive coordinator. Greg is someone we are going to use in recruiting nationally. He has had great success recruiting. We never want to limit ourselves to the areas that are going to be our foundation. We also want to be sure to recruit great players around the country."

As is the requirement for all SU football coaching positions, Adkins and Marrone worked together, both on the Georgia staff in the early 90's.

Adkinds has had stops in Marshall, Georgia and Troy State as well as UT.  He's coached and recruited many a current NFL player and his most recent offensive line led the nation by only giving up four sacks all year.  Not too shabby, especially given the season the Vols had.

According to his UT bio, "Adkins is married to the former Michelle Gillespie." Is that how you say that?  Does that mean she just changed her last name or does she have some kind of secret alias now?  Like she's formerly Michelle Gillespie but now you can call her Action Monroe!

Like Lou Brown told Pepper in Major League, thing are "startin' to come together..."  Let's just hope Greg takes a better bio photo that his previous one.  Did someone behind the camera just tell Greg his dog died? 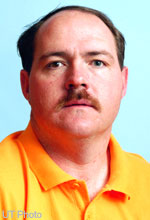