Share All sharing options for: Arthur Jones Still Has A Lot Of Lobster Claws Left To Crack

At the 2009 Big East Football Media Day in Rhode Island, lobsters will be served.  And Arthur Jones will be there eat as many of them as he can.  And he will gorge himself as a member of the Syracuse Orange.

Jones, Syracuse's only 1st Team All-Big East member, will return for his senior year.  It's fantastic news for Coach Marrone and his staff as well as Orange fans who desperately want to see some stability on the defensive side of the ball.  In his own Greg Robinson-y way, Jones said he remains committed to making SU a winner again:

"I want to finish what I started and leave Syracuse a winner," Jones said. "It is about this program and getting it turned around. We have a great team coming back. I really believe we can get this going in the right direction."

It would be interesting to see what Jones saw, or did not see, from NFL scouts and draft predictors and how that might have influenced his decision. 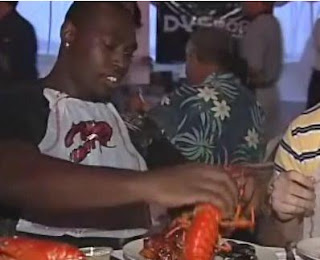