Looks like we have a late enty in the Doug Marrone nickname search:

Rob Spence was introduced today as the new OC/QB Coach at Syracuse and he seems truly excited about the chance to coach at the place he remembers as the "mecca of coaching." Greg Robinson notwithstanding.

One of the big concerns folks have over Spence is his tenure at Clemson during a time when the Tigers were consistently under-performing:

"A lot of times people get tied up . . . on one specific incidence," Marrone said. "Really what you have to do is look at the overall career. And I really think that when you look at his overall career and the statistics and the amount of things he has accomplished in that position, you're going to see a lot of great things."

Spence has so far kept things broad when discussing the kind of offense he wants to run ("We're going to be multiple and fun").  but he make have tipped his hate slightly on the kind of things he's going to focus on, at least:

"I think the Dome is an attractive feature of this university," he said. "I think it's a great selling point to anyone looking to play in this part of the country because it's a controlled environment. The Dome is about speed. There's no wind, there's no ice, there's no rain. Talk to any quarterback and any skilled athletes, and one of the things you can't control is the weather. In the Dome the element is controlled. That can play into your favor time and time again."

Not exactly "Texas Tech spread here we come!" but an indication of speedier things to come.

As for what kind of coaches we can expect to see fill in the roster around Spence, Dan Conley, John Anselmo and Derrick Jackson?  Check their resumes and look for a Syracuse tie, says Coach "Marron":

The Syracuse ties will always be the focus and it's going to continue to be the focus as long as I'm the head coach at Syracuse University. Now, with saying that, if we do have someone outside of the program or outside of those parameters that have been set who is an extraordinary coach and extraordinary recruiter, for me to sit here and say we weren't going to look at that person would be ridiculous.

Dave Rahme breaks down some of the quotes from today further in his article.

I'm looking forward to seeing what new wrinkles Spence can put on the SU offense.  One request though...STOP STARING DIRECTLY AT ME, ROB!  CRAZY EYES!!! 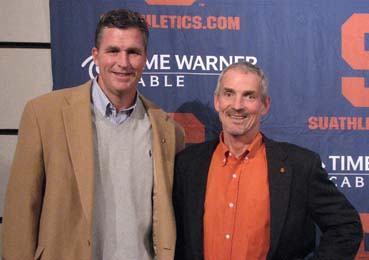