The Most Important Decision Of The Doug Marrone Era

Share All sharing options for: The Most Important Decision Of The Doug Marrone Era 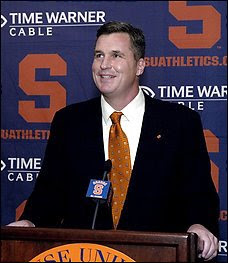 What should Doug Marrone's generally-accepted nickname be?

Let's look down the list of options, shall we?

"D-Marr" - Christ no!  Thank God we don't have a coach who's name subscribes to the "first letter of the first name-beginning of the last name" style that has plagued our society for so long.   No more will 50-something journalists have to use out-dated nickname slang.  This is a joyous day!

"D-Nice" - I think we'd all prefer it if it were D-Not-So-Nice but at least in this instance he'd have a sweet intro song when he walked out of the tunnel.

Clearly, this is the early leader.

"The Saint" - Get it?  He came from The Saints.  If SU does well under him, he will have become our saint.  And if I remember my Val Kilmer filmography well, I'm pretty sure that guy helped people too.  Genius!

Various "I'm Doug-related Names" - Keeping with last week's excitement over the usage of "I'm Doug" clips from The State, how bout some semi-related names that come from Doug's irreverant catchphrases?  Such as...

Almost as important as Senor Marrone's nickname is what we'll call the Carrier Dome once it's rockin' again.  Basketball has The Loud House.  But for football, how about...

"The DMZ" - Then again, DMZ is short for demilitarized zone which is usually an area "where military activity is not permitted." I think that's kinda like what the Carrier Dome is now.  So...

"The Doug-oba System" - You didn't think you were going to get out of here without a poorly-constructed Star Wars reference, did you?