So Much For Double Duty

Share All sharing options for: So Much For Double Duty

Before and during Coach Marrone's press conference, everyone talked about how Doug wasn't walking away from the Saints and he was going to finish what he started there before fully moving on to Syracuse.

Marrone was introduced on Friday as the new coach of the Orange. He had planned to continue his role as offensive coordinator of the Saints through the end of their season while simultaneously working on his new position as head coach at Syracuse. His resignation clears the way for him to jump into his new job with the Orange immediately and full time.

The Saints only have two games left and, at 7-7, they realistically don't have a shot at the playoffs.  So everybody wins...they move on ASAP and the Orange get Marrone to hit the recruiting trail and hire coaches right away.

Also got an email from SUAthletics about the matter... 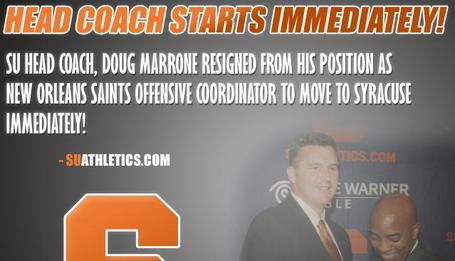 Looks like we're missing a comma up there, folks.  Otherwise, point is made.  Although I seriously want to know...is there an internal mandate at SU Athletics that DOCTOR Gross must either be quotes or photographed in all marketing material that goes out?  Seriously, I think the SU Athletics creative guidelines include:

If this memo exists, please, send it my way...