I decided to watch the entire press conference now that the SUAthletics.com site has calmed down and I've got some play-by-play notes for you while you watch.  Kinda like a pop-up video except without all that Rick Astley.

0:10 - DOCTOR Daryl Gross doesn't ask for much.  Just a good football coach and a microphone that isn't three feet away from him when he gets to the podium.

3:40 - The Saints offense is "the most prolific offense you'll see."  Surely the finest 7-7 offense in the world.  (Easy with that...we're pleased with the guy, you don't need to make him out to be Bill Walsh)

4:45 - "And right now, what I want to do is bring up the new head coach at Syracuse University...Doug Marrone."  Just kinda cool, I dunno, call me sappy...if you're being hopeful about the guy this is a big moment.  And if you're not...get back to work on FireDougMarrone.com.

5:06 - Marrone gets the #1 jersey.  Man, Mike Williams gets suspended.  Now he loses his jersey to a o-lineman.  No respect.

(By the way, I think they should make coaches wear jerseys.  Hell, make'm wear full uniforms.  Including the helmets.  If a mental picture of Mark Mangino in skin-tight pants didn't already enter your mind, it will.  You're welcome.) 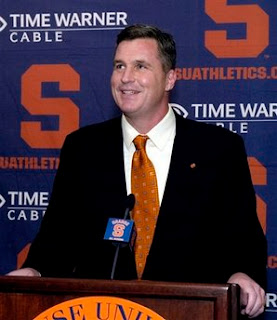 6:25 - "I hope that one day I can stand in front of my school and my friends and be the head football coach at Syracuse University."  Folks, if there's anything we learned in this coaching search, it's that not many people valued this job very highly.  We assumed that Skip Holtz and Turner Gill would both eventually use SU as a stepping stone if either got the job.   For Doug Marrone, it's the pinnacle of his career and, at least for the foreseeable future, there is no job out there that he would consider a step-up.  Gotta count for something.

6:40 - "A kid from a Bronx haivng a dream and making it come true."  Finally, Doug Marrone has something to talk about with J-Lo at the next Bronx Reunion.

10:32 - "Tim Green was probably the most beautiful recruit we ever had."  What the hell is going on with all this Tim Green man-love?  He must give CRAMAZING shoulder rubs.

11:30 - Really sounds like the mandate went out to talk up Marrone's recruiting skills.  Makes sense.

12:19 - I almost want to have a 2nd Bar Mitzvah just so I can invite Coach Mac up to light a candle and say the hamotzi.  He's a delight.

13:58 - Fantastic story about Steve Rogers that went absolutely nowhere.  I will go out of my way to listen to any radio or TV broadcast Coach Mac does from now on.

16:38 - So THAT'S why everyone's on Tim Green's jock.  He's strapping!  I want to reach through the screen and shake his hand for a few seconds too long.

21:58 - Nice to hear Marrone is going to see what ingrediants he's got to work with first before he picks a recipe.  Especially if he doesn't choose the Pistol.

24:06 - "I think I found him in Montana, I don't know where the hell he was."  Something tells me Coach Mac thinks he's in Montana right now.

28:40 - Doug says "this is an exciting time" in the least exciting way possible.

31:27 - Wait...head coaches get involved in time-management and how players conduct themselves off the field?  THEY CAN DO THAT???

36:09 - "You know, football's gone so many different ways these days with the Internet...and our bloggers...and our articles...and what we write...it's so hard nowadays to make sure that, you know, other schools that we're competing against, you know, don't use it against us."  Hey, we keep beating MAC teams, you won't hear a peep out of me.*

36:51 - "We are NOT in a rebuilding process.  We are in a process of rejuvinating this program."  Slightly Gregism-esque, but, I'll allow it.

39:47 - You're right, there is only one BCS School in NY.  There's also one one bowl team in NY this year.  And the twain are not meeting.

And with a final "thank the Lord that's over" look on his face, Doug Marrone ended the first of many press conferences as head coach of SU foootball.  I could get used to this.