Share All sharing options for: How Much More Marrone Can This Day Get? None. None More Marrone.

Some things to think about while you wonder if Doug Marrone was able to pull DOCTOR Gross' heart out of his chest Temple of Doom-style... 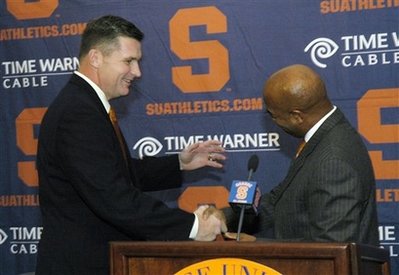 I've been looking all over for an article that breaks down Doug Marrone the guy and the coach rather than just give me dates and stats. Thanks to James M. and Anthony T. for sending over a link to this coaching candidate breakdown from the Tennessee blog 3rd Saturday in Blogtober. Marrone was apparently in the running or at least on a list for the UT job at one point and this blogger breaks down Marrone in a way SU fans can now appreciate. Some nuggets...

Aside from his 1995 stint with the Yellow Jackets as director of football operations, Marrone has mentored either a team’s entire offensive line or focused strictly on positions within the line, tight ends and tackles being the prime example. That is, until two years ago when New Orleans Saints first-year head coach Sean Payton plucked Marrone from the Jets to name him offensive coordinator - a pole vault of a move considering the former guard had only streamlined his efforts in the trenches in the years leading up to that...Payton’s bio simply states he surrounded himself with coaches who are teachers first.

Again, it goes back to teaching. Payton is the one who calls the plays with New Orleans. That frees up Marrone to do the sideline administrative work of coaching.

Marrone is a teacher through and through, and that’s something he acquired by working his way up the college coaching ladder in a rather lightening pace. So what about personnel? That’s where Marrone could benefit the Vols the most. He’s an offensive line guru.

Here’s a guy who has been there, done that. He’s coached at a 4,000-student school, at an urban university and in the Southeastern Conference, and yet he’s also coached at two NFL teams. He’s spoken in high school seniors’ living rooms, mentored 18-year-old freshmen, and he’s taught 30-something-year-old veterans. He knows the game, and better yet, he knows how to communicate with a variety of pupils to sell them on his way of doing things. That’s critical at this moment for a team that is in limbo and is full of student-athletes who, for some, assuredly feel like they just got slapped in the face.

Doug Marrone is going to be a head coach, that’s quite obvious. Will he be Tennessee’s next head coach? Likely not. Now that he’s passed by the college rungs on the ladder, it’s not likely that he will take a step back. He’s successful at his position in the NFL, and if that leads to a head coaching job, it’s going to lead to an NFL head coaching job - not a college one.

Except if that job was Syracuse, apparently.

Some other links of note: