Share All sharing options for: Syracuse Flashes In 1st Quarter, Spends Rest Of Gaming Not Flashing

The Syracuse football team jumped out to a 14-0 first quarter lead on an 82-yard touchdown run by sophomore Doug Hogue and a blocked punt returned for a touchdown in a 35-17 loss at Rutgers Stadium.

Gosh, they make it sound like so much fun! And for one quarter, it actually was. With the aforementioned two plays the Syracuse took a shocking 14-0 lead as the 1st quarter ended. Rutgers was being blown out and Syracuse was doing the blowing (wait...). All was right with the world.

Then everyone remembered who they were:

It was painfully easy for Rutgers. The Scarlet Knights turned the ball over three times and had a punt blocked that Syracuse recovered in the end zone for a touchdown. It mattered not because the Rutgers defense mauled the Orange - held to 168 yards total offense - and Teel directed three touchdown drives on his team's first four possessions of the second half.

The defeat dropped the Orange to 2-7 overall and 1-4 in the Big East with three games remaining. Syracuse is assured of its fourth consecutive losing record under Robinson, who is 9-35 overall since replacing Paul Pasqualoni after the 2004 season. 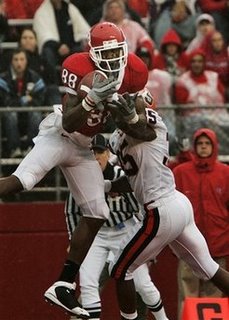 For all of you Orange fans who booked hotel rooms in the vicinity of the International, Continental Tire and St. Petersburg Bowls after Greg Robinson said last week that the Orange still had a shot at a bowl bid, well, it seems now that you were misled. I'm sorry you couldn't have seen it sooner.

Hey Doug Hogue, nice to see you again. Doug Hogue had the longest scoring run by a Syracuse player since 1953. On his next carry, Hogue ripped off...well...nothing. He didn't run another carry the entire game. Curtis Brinkley got 18 carries and was held to 67 yards at a clip of 3.7 yard per carry. You might question why Greg Robinson would immediately remove the guy with the 82-yard TD run to make sure the RB who is struggling got most of the carries. To be honest, it's all a little technical and scientific.

Speaking of Brinkley, he did fall short in the quest to break the school record and rush for 100 yards/game in five six straight games. He did however break 3,000 career all-purpose yards, making him the 17th player in SU history to do so.

At the beginning of the game, I was ready to text all of my Rutgers friends and let them know how truly awful Mike Teel was. Luckily, I didn't. Otherwise, they might have felt the need to respond after Teel finished with 277 yards and three TDs. Rutgers fans are prickly like that. 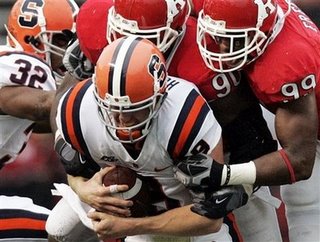 Andrew Robinson was re-introduced to the wild and quickly reminded us why we haven't seen him in a while. The Axeman explains:

Late in the game on what would turn out to be Syracuse's final offensive possession, Robinson attempted a simple swing pass to Curtis Brinkley. Brinkley was open and was no more than four yards away from Robinson. It was as easy as a pass gets.

Arob's throw looked like he was tossing a medicine ball to Brinkley. It just dropped to the ground in front of Brinkley like a Greg Maddux curve ball. The look on Brinkley's face after that was one I'll never forget.

Robinson looked completely lost out there and seems to have zero confidence right now.

Awesome! I don't care if we all have to rub chamomile on Cam Dantley's ankle all day, every day for the next week, we will make sure it's healed by Saturday.

Dantley injured his ankle late the game, leading to Andrew Robinson's return. It was then and only then that Greg Robinson felt it apropos to at least TRY a different direction at QB. Dantley's 3 for 12 and 19-yard performance up until then seemed just status quo (we'll get to Greg's reasoning in the next post...don't you worry).

At the end of the day though, it's all about Greg Robinson. Last week I feared that if Greg were able to pull off two more wins this season that he might be able to somehow salvage his job. Now it's clear that, just like last season, the Louisville win was a fluke. There isn't a person alive not named Greg Robinson who thinks he still has that chance to retain his job. Case in point...

Donnie Webb tries to look inside the fragile mind of DOCTOR Gross to see what kind of timing he's thinking of to make the move. He looks at both sides of the coin...that firing Robinson now could give SU fans the relief they need but it could also cause the football team to quit on the rest of the season. To be honest, I don't really think we're all that concerned with the rest of the season anyway, so you might as well let'r'rip.

Oh and, just in case you haven't noticed, the crying child hath been cued. And so, we're left to wait for the inevitable. In the meantime, Syracuse fans will just do what we do best...drink mass quantities of alcohol in short bursts.