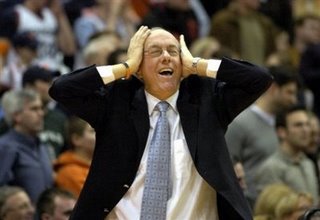 Hope you're as excited as Jim over there. It's SU Basketball Preview day over at Syracuse.com. Get our your readin' goggles and get to it.

The return of Eric Devendorf and Andy Rautins is the prominent story leading into the season. Will the knee-braced warriors bring with them the sharp-shooting and intensity that they had before their ACL injuries?

Devendorf provides Syracuse with a double-threat — a guy who can hit the long ball and might just be the best finisher in the Big East. If any team decides to help off Rautins, he’ll make them pay. Remember that Rautins’ 3-point percentage soared to 41 percent in the second half of his sophomore season.

More room for Flynn to maneuver. A better 3-pointer shooter than Greene in Rautins. And the return of the ultimate shot-maker in Devendorf.

Don't forget about Jonny Flynn though, who may just be the best point guard in the nation. Before we know answer to that we need to know what makes a good point great...let's ask Jonny himself:

Donna and Mike wonder who that Donte guy was from the last year and who needs him anyway? Please oh please don't let Donte Greene read this article, he'll be crying to the Sacramento Bee for a week.

There Will Be Zone. Jim Boeheim's defensive-specialty drinks your milkshake. It's DRINKS IT UP!

"I read where Jonny said he wanted to play more man-to-man," Boeheim answered when asked if his Syracuse University athletes preferred one defense over another. "I don’t know. Maybe he was misquoted. But I don’t have a sense of anything like that. I think our players want to win. I think the players want to do what’s best for the team."

Don't forget about Kristof! and Do-It-All Paul, people. Especially Harris, who is sure to be the Orange's wild card all season. Capable of a double-double at a moment's notice, Paul is going to be the unsung hero mark my words.

"Paul Harris had a good year last year," Boeheim said, "but I expect him ... to do more. I expect him to be a better player, be a better leader, to make more plays and to be a more dominating player. I think he can be and I think he thinks he can be. This is his year to step up and do those things."

And finally there's the big man, Arinze Onuaku. No broken backboards at Midnight Madness this year but he still plans to make an impact. Especially now that he's got more depth behind him to help out:

Arinze Onuaku figures to breathe more this year. On the Syracuse bench, he plans to relax for, say, 10-15 minutes per game while Rick Jackson or Sean Williams occupies the empty space in the middle Onuaku filled for more than 31 minutes each game last season. "We got more depth this year," Onuaku said, by way of explanation. At center, the Orange will summon Onuaku to start, but will increasingly rely on Jackson, who can and will play center and power forward this season. Williams, who is purely a center, will try to convince the staff he deserves more than the miniscule 22 minutes he played all of last season.

Mike Waters, Donna Ditota and Bud Poliquin all provided their own best guesses on how the season will go for the Orange and while they differed on the win total they were all in agreement on the loss column. Mike has the Orange finishing at 24-10 and making it to the 2nd round of the NCAA Tournament.

Mike seems to think the Orange will be one-and-done in the BET, giving them only one game there. Donna thinks the Orange are going to the Sweet Sixteen...but factoring in the BET and a final record of 23-10 that's literally impossible. So...not sure bout that. Bud is the big dreamer of the bunch, going 27-10 and putting the Orange in the Sweet Sixteen as well. I THINK this is what Donna was going for as well but she left out the BET and NCAA Tourney. We won't hold it against her.

But what do YOU think? The site is hosting a poll asking you to determine where the Orange will end up at the end of the season. Sweet Sixteen is running away with the voting so far (566 whopping votes). I went Elite 8 to be honest, but whatever if you want to buy into this agenda that SU isn't good, fine, do that. Automatant.