No Respect, I Tell's Ya

Share All sharing options for: No Respect, I Tell's Ya

If SU is going to return to being an elite basketball program this season, they are gonna have to earn it. 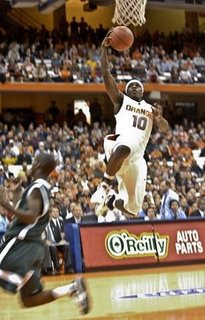 Public sentiment continues to be that the Orange are juuuuust a bit outside of being a top team heading into 2008-2009. SI released their pre-season Top 20 and left the Orange on the outside looking in. The saving grace is that in a roundtable discussing the Top 20, the SI writers gave the Orange much credit:

Davis: Believe it or not, I'm going to say Syracuse. I saw one national writer compare the 'Cuse to Maryland as prominent programs that will fail to reach the NCAA tournament. I totally disagree. Again, people see they lost Donte Greene and think that will be a problem, but Greene was a great individual talent who had very little understanding of how to make his team better. The Orange still have Jonny Flynn running the show -- he may well be the best point guard in America -- and he will make a great pairing in the backcourt with Eric Devendorf, who was having a sensational season last year before he got hurt.

Wahl: Syracuse. The Big East is so loaded that a team could probably finish in the bottom half of the league this season and still make the NCAAs. But I think the Orange are due for a resurgence now that everyone's healthy again (that means you, Eric Devendorf and Andy Rautins). Jonny Flynn is a terrific point guard, and while forward Paul Harris hasn't fulfilled all of his hype (remember when some folks thought he'd be the national freshman of the year ahead of Greg Oden and Kevin Durant two years ago?) he's still a rugged, productive player. Nor do I think losing Donte Greene to the NBA is a major problem. Bottom line: It'll be nice to see Jim Boeheim smiling again this season.

Sweet Mercy May Brown, the Bracketology has already started. The Sporting News unleashed their preseason brackets and have placed the Orange as a 7-seed. Based on the rep the Big East has right now, nine teams total are in their brackets, two of which are #1 seeds (UConn & L'ville).

SU is just outside of ESPN's Top 25 Power Rankings, coming in 27th as it were. The conference gets four teams in the Top Ten. Yeesh.

Make sure you check out Card Chronicle's 50 non-conference games of note where they list the most important OCC Big East games of the season. As for SU, they note Syracuse vs. Cleveland State, Syracuse vs. Florida and Syracuse at Memphis.

But like I said last year, I don't really mind being undervalued at all. I'd much rather be on the outside looking in to start the season and earn our keep rather than set expectations sky high and feel disappointed after each loss.