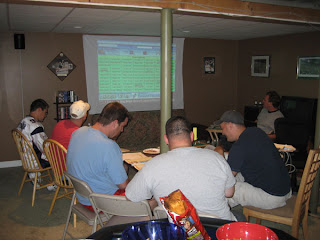 You're in the 7th round of your fantasy football draft.  You've got your stud RBs, your QB, your WRs and a TE.  You've still got a couple more spots to fill...you need depth at RB, maybe you need to think about the appropriate handcuff for your starters, you need a capable backup QB and you what about those rookie sleepers still out there...

All of a sudden someone takes a defense.

Everyone looks at each other.  Surely this was a horrible move.  Defense?  In the 7th round?  Who brought this guy?

Then someone else takes a defense.  And then someone else does.  All of a sudden its your turn and the calculations in your head just fried your cortex.  There's no way you should be taking a defense yet but, well, the elite ones just got taken off the board and it seems like the next level might go any minute as well.  Your carefully laid-out plans are shot.  You better grab the Cowboys' D now and worry about that reach WR next round.  Otherwise you might get stuck with the Bengals D and you're shut out.  You know it's not the logical thing to do but the clock is ticking, you're mind is racing and you're up.

My fear is that, with Tennessee making the first move by locking up Lane Kiffin and the glut of newly-available BCS positions, Syracuse is going to need to move very quickly to lock up a coach of their own or risk being in the exact same position that got us here in the first place.  Because surely everyone else is now thinking the exact same thing.

We're already in competition with Clemson and Washington.  Mississippi State is now in the hunt as well.  There's a strong possibility that Notre Dame will be back in the game if the right person is available.  If you believe rumors, Cincinnati might be looking as well. There's a chance Auburn might also be in the mix.  And this is all before you factor in programs like Iowa State, Texas A&M or Indiana who could all make changes.

Syracuse has had the luxury of a head start compared to most and they seem to be making the most of it.  But things have been quiet for the better part of the last two weeks.  And for a program that isn't exactly the most attractive of the bunch, we can't afford to be complacent and make the rounds at our leisure. We've had a couple interviews and we've got at least one that we know of lined up for this week, but are we moving fast enough?

My guess, which is only that, is that Syracuse needs to figure out who their next football coach is by the end of next week or else get stuck picking at the leftovers again.

It sounds like DOCTOR Gross is doing his due diligence.  And who knows if something's going on behind the scenes we don't know about, such as a secret handshake with Randy Esdall or Skip Holtz.  Whatever is really going on, I'm just hoping it gets resolved sooner than later.  Even with the stiff competition out there, there's no excuse for SU to be stuck with their 2nd choice.  We can't afford to screw it up this time.