Share All sharing options for: Jameel McClain Would Prefer It If Current SU Players Kept Their Shirts On

There's a sense that the current SU football team lacks a certain moral center.  A guiding light which the players can follow to show them the way to present themselves to the rest of the world.  You know, the kind of thing that would prevent two players from opening a business mid-season in which customers can smoke things out of pipes.

It's probably also the kind of thing that would prevent photos like this from showing up on the Internet: 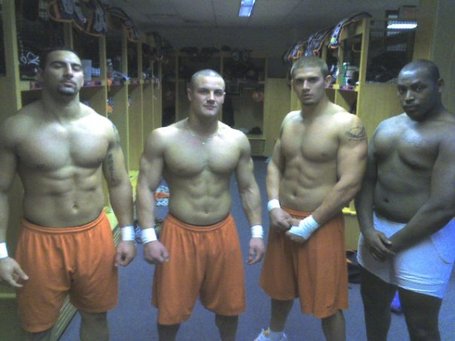 Little known rule.  Anytime players from my favorite football team take photos of themselves looking like they're about to go bar-hopping in Seaside Heights, NJ with these guys, it's worth noting.

This kind of thing never used to happen in Jameel McClain's day.  The Baltimore Raven and former SU star would have put the kibosh on something like this before the camera had a chance to click.  Thankfully, even from afar Jameel can still provide his guidance on such matters via Facebook comments:

yo get this gay ass shit off facebook... ya"ll got too much time on ya hands

The Sport Hump got their hands on a couple other photos that you probably shouldn't look at but you know you want to.  If only because you know as soon as the new coach is hired he's going to do the sensible thing and ban all SU football players from using social networks so they can never again post photos of themselves looking like The Hotti Brothers-in-training.

Oh and can someone please find Art Jones' pants?  Thank you.