What's The Difference Between A Hockey Mom And Quentin Hillsman?

Share All sharing options for: What's The Difference Between A Hockey Mom And Quentin Hillsman?

Quentin Hillsman will eat your soul.

And hide your body.

And erase your financial records.

And it will be as if you never existed.

The SU Women's basketball team lost 58-57 to the Alaska-Anchorage Seawolves on Thursday 58-57.  Disconcerning since the Seawolves are a Division II program.  Also disconcerning was a late timeout call by Anchorage that Quentin found to be a little shady, considering the Orange had the ball at the time and would therefore make it impossible.  That this all took place in Anchorage at the Great Alaskan Shootout would make any head coach's head spin.  It might even make them say something about it.  Such as...

"You know what happens when you've got the ball and you're dribbling down the sideline and they give them a timeout? That is cheating."

Oh boy.  Here's a breakdown of the actual play:

What raised most of his ire was a call with 21 seconds remaining. SU's Tasha Harris had gained control of a loose ball at midcourt and was headed for an uncontested layup when officials blew the whistle and granted a timeout to Seawolves coach Tim Moser. Officials ruled that UAA had possession before Harris broke free.

Hillsman had to be restrained by his assistants after the call and pretty much focused on it during all post-game interviews.  Hillsman's comments also prompted the writing of a sternly-worded letter by UAA athletic director Steve Cobb to DOCTOR Daryl Gross.

"We are surprised and dismayed by Coach Quentin Hillsman's unsportmanlike comment about the last night's game," Cobb wrote. "Statements like his do a disservice to all participating athletes."

"We are proud and supportive of all the athletes who participate in the Shootout," Cobb's letter said. "We are especially proud of UAA's women's team who played an exceptional game last night. Coach Hillsman's comments should not cloud their victory, nor should it cast a doubt in anyone's mind about the integrity of our organization."

#1, you get the feeling this has been the top story on the news in Alaska for the last four days, don't you?

#2, did he actually write a letter?  Like hand-write it?  Cute, Alaska.

No response from Gross yet but Hillsman, who's had a couple days to think about it, has made some comments.  And those comments are basically..."F Alaska, I'm still pissed."

"Basically, here's how I feel," Hillsman said. "It's a basketball game and you know me. You know I'm enthusiastic. You know I'm into every play. And it was just one of those emotional games. . . . Out there it was a tournament-style setting. It was like going to the Big East Tournament, the NCAA Tournament. So, our goal was to go out there and win basketball games. Anything other than that, I don't really have a whole lot to say."

When asked whether he would use a word other than "cheating" if given a do-over, he responded:

"If I had a do-over, I'd do the whole game over and then I could win the game."

By the way, I will never ever write anything bad about Quentin Hillsman.  Look at him!  He could tear my heart out just by pointing and staring at me. 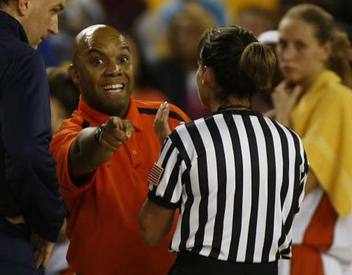