Before the season started, I commissioned (Commissioned?  Who the hell do I think I am, Pieter van Ruijven?) this Photoshopped image: 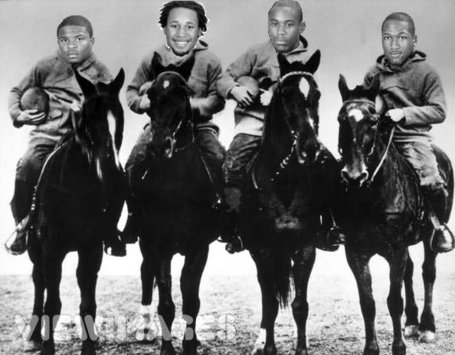 That Curtis Brinkley, Averin Collier, Doug Hogue and Delone Carter, the four candidates to be the starting running back for the Orange in 2008.  We figured that, no matter which one became the go-to guy, all four of them would have a major impact on the season.

When it began, Brinkley pulled away from the pack but Carter and Hogue remained in the mix.  Collier's season was over before it began as an injury and an apparent lack of growth pushed him to the bottom of the pile.

Soon though, it got weird.  Carter was injured early in the season but despite his healing and desire to play, has seen action sparingly since.  Hogue did...something...and all of a sudden became a blocking specialist, relieved of any kind of carrying duties.  A lone touchdown scamper a few weeks back only occurred due to a quarterback audible and not by design.

And there was this Antwon Bailey character.  Who did this kid think he was?  We had heard he was a candidate for redshirting and now he was getting a couple carries a game?  Stealing reps from a proven starter like Carter or a workhorse like Hogue?  He's a freshman and he's not even supposed to be our best one.

Bailey got off to a very rough start with SU fans when he was inserted late against Pittsburgh with the game on the line, a decision that puzzled pretty much everyone, including Curtis Brinkley, the back everyone knew should have been in there.  Bailey's first carry of the season and college career required him to put the Orange on his back and drive them to victory against the momentum of the stingy Pitt D.  It didn't work out so well.

And now...it turns out that Greg Robinson was right to think that Bailey could carry the Orange on his back...he just got the timing wrong.  Bailey carried the Syracuse Orange offense in the 4th quarter against Notre Dame en route to 126 yards rushing and a touchdown.  All of a sudden, we were left wondering how the hell we made it this far without appreciating the kid's talent.  Concerns over Carter and Hogue's reps seem like a silly, antiquated notion.  All due respect to them and the efforts they've put in this season but...I have seen the future of Syracuse's running game and it's name is Antwon Bailey.

In an interview with the Daily Orange, even Bailey admits this weekend's results seemed far-fetched when the season began:

"Coming into camp, I was probably about fourth or fifth on the depth chart," Bailey said. "I was way behind. I pretty much had to work my way out of a redshirt year. I definitely didn't expect this though."

Bailey had worked his was into Syracuse's tailback rotation early in the season, eventually surpassing Carter and Hogue. He was a quick, shifty compliment to Brinkley, SU's senior workhorse. "He's not a surprise," SU head coach Greg Robinson said of Bailey. "… He's a talented young football player."

Ironically, Bailey might end up being one of the lone bright spots that Greg Robinson leaves behind.  Maybe the brightest.  You don't put a team on your back on the road...in South Bend...in freezing temperatures...down 13 points...in the 2nd half as a fluke.

Coupled with his newfound role as Wildcat "point-man", Bailey is set to become an integral part of the Orange's offense next season.   And with Brinkley seemingly wearing down as the season goes on, Bailey's not done yet on this year either.  While no SU fan is expecting the Orange to repeat their actions from this previous weekend, they are keenly watching the SU backfield to see who lines up and especially how Antwon Bailey follows up his name-making performance.

"It's like you're a 16-year-old all over again, and you get your driver's license and your mamma lets you have the car," Bailey said of Syracuse's final drive.

It's safe to say it felt that way for all SU fans as well.  Like we were on the verge of an entirely new and exciting experience that we've been waitiing for as long as we can remember.  Antwon Bailey set the bar high for himself last weekend, I'm looking forward to seeing how he lives up to it.