Hey, if that's how ESPN sees us, it must be true. 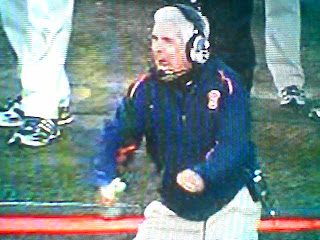 So seriously...this happened today.  The first question that comes to mind...what would the Greg Robinson Era have been like if he coached this way the entire time?

It's apropos that promos for a Tim McGraw-hosting SNL were peppered throughout the contest.  McGraw has a song entitled "Live Like You Were Dying."  And that's what Greg Robinson finally did.  He coached like he was...well, not dying, unless there's something we don't know about.  But he coached like it didn't matter if he had to face the media and the fans afterwards.  He coached like someone with nothing to lose.  Unfortunately for Greg, it's true.  But for SU fans and for Greg himself, at least we got one game out of the last four years that we can all point to and say "If only we did it like this the entire time...who knows..."

HUGE credit given to the SU football players who answered the question "will they quit?" with a resounding "F**K NO."

The first half was unlike anything I remember seeing out of this team all season.  Cam Dantley was a surgeon, picking apart the ND secondary.  Curtis Brinkley and Antwon Bailey were running solidly.  And the SU defense...my word.  I mean, they just made me write "my word."  Even though the score was only 10-3, the first 28 minutes of the game was about as well-coached and well-played as I've seen from the Orange all season. Maybe even in the entire Greg Robinson Era.

Wildcat formations, halfback passes, going for it on 4th down in the 1st quarter...who is this Syracuse offense, where they have been and what have you done with our boring, vanilla, plain team?

The last two minutes of the 2nd quarter?  Well, it looked like the other shoe was dropping, as it always does.  The Irish took a 14-10 13-10 lead into halftime and every SU fan surely thought there same thing.  "Well, enjoyed it while it lasted..."

The 2nd half started about the same way the first one ended.  The Orange offense suddenly looked, well, normal and the Irish were making moves.  I blinked and all of a sudden the Orange were down 23-10.

And then, Antwon Bailey happened.  Seriously...Doug Hogue who?  Delone Carter whatnow?  Bailey's final numbers...126 yards rushing, 25 yards passing and a touchdown.  With Brinkley on the sidelines (injured or just not working?), Bailey stepped it up with some fantastic moves and runs.

By the time Dantley hit Donte Davis in the endzone for the go-ahead touchdown, there was a wierd feeling going on inside every SU fan.  Well, I guess I can only speak for myself but, before he threw the pass...I kinda expected them to score.  That's crazy, right?  I felt comfortable enough with the Syracuse offense that they would score a go-ahead touchdown with less than a minute to go and win the game on the road at Notre Dame.

What the hell is going on???

I will be the first to admit I felt pretty good for Greggers.  Say what you will (and I've said a lot), the guy's taken it all in stride and, at least this one time, he backed up what he was saying all week.  This team wouldn't quit, that's what he kept telling us.  And he was right.

Big kudos also to Mitch Browning.  Whatever it is you did in your game-planning, keep doing it.  If this was an audition for the next head coach, you just passed.  This was fun.  This was exciting.  Let's do more of this, okay?

So what does it all mean?  Is the season saved?  Hardly.  But we won't lose ten games again, and that's something.  We just beat Notre Dame in South Bend, and I don't care how good or bad they are, that's something you can always hang your hat on (the kids don't still say that, do they?).  We may have just done wonders for our recruiting profile.  We also did the Big East a major solid, ensuring that Notre Dame will not play in the Gator Bowl over a BE team with a 6-6 record (assuming they lose to USC next week).

There's a lot of moral victories here but there's a couple real-live ones as well.  The seniors get a little redemption before they go.  They get to win their "bowl game."  Most importantly though, Syracuse football is relevant again...at least for one day.  We're the top "Breaking News" story on ESPN News.  Every other college football broadcast team is talking about us.  A lot of people will be talking about this win for a long time to come.

Get the full scoop at your many SU resources, including: