Look at the facts:

1. Top prospects SKip Holtz, Turner Gill and Rob Ianello claim they haven't been contacted about the position yet.  Huh?

2. The top prospect, Randy Edsall, was forced to publicly deny his interest in the job and his reputation is taking a big hit over in Storrs. 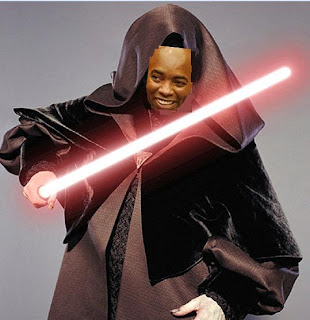 3. Daryl went on a radio program this week and said "everyone" is a candidate for the SU job...not just esteemed college football coaches.

4. Greg Robinson has so thoroughly destroyed Syracuse Football that even an untrained neophyte could step in right now and do no worse.

The evidence is clear and so is the truth.  DOCTOR Daryl Gross will be the next head coach of Syracuse Football.

That is some seriously well-planned Emperor Palpatine mastermind stuff there, DOC.  You played Jar-Jar Robinson and Queen Cantordala like a, well, whatever that instrument was that the blue elephant-looking guy was playing in Jabba the Hutt's lair.

Just remember, Rebel Scum, there are always two.  A master AND an apprentice.  We must identify who that is if we are to have any chance of defeating the Empire and restoring order to the Onondaga Galaxy.

Help us Coach Mac, you're our only hope...