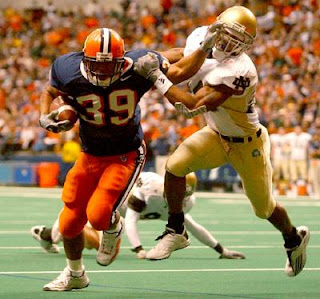 When I asked Chris over at Rakes of Mallow to answer some Q's about tomorrow's game against Notre Dame, I didn't realize he and Brian at Orange44 already had a hot and steamy exchange going on.  Chris answered some questions on Orange44 and Brian responded with five potential pitfalls for the Irish.

I made myself the third partner in this ménage à trois of Syracuse/ND information exchange and asked Chris a couple different questions to get us ready.  Let's get it on...

Assuming the Irish beat SU but lose to USC, the word on the street is that they are Gator Bowl bound. If I told you before the season that the Irish would finish 7-5 and go to the Gator Bowl, your reaction would have been...

I would have been pretty pleased after last season, but the way some of those losses have come, with wins against Pitt and North Carolina slipping away and a no show at Boston College has got a lot of other Irish fans pretty upset. I just hope we end up in the Gator Bowl or below (Viva El Paso!), because there are lesser rumblings we might go to the Cotton Bowl. Can you imagine us going against whatever Big XII team doesn't make the BCS? And you wonder why the Irish have a bowl losing streak.

But in all honesty, my co-author and I picked the Irish to have seven or eight wins this season. It would have been nice to have our expectations exceeded, but there are growing pains when you're playing so many freshmen and sophomores.

How much of a leash do you have on Charlie Weis (figuratively, not literally)? Do you need to see a 9-10 win season soon or else he's out?

It would be in Charlie's best interest to be at least mentioned in the national title hunt for most of next season, if only to make sure the gathering mob is somewhat placated. Here's the thing: Say Charlie goes 9-3 next year and loses a bowl game. How do you fire a guy who just went 9-4? Yet a lot of Irish fans are saying anything less than 10-2 is an offense worthy of firing. If Charlie doesn't get at least 9 wins next year, there needs to be some serious reevaluation of the program because our schedule in 2009 is pretty weak. There are road trips to Ann Arbor and Pittsburgh and home games against Southern Cal and Boston College, but the Irish should be stacked.

For the most part, ND keeps a very consistent schedule. Michigan, Michigan State, Stanford, USC, Navy... If you could pick one of the "usuals" from ND's schedule to drop, who would it be? Who would you like to add as a yearly foe?

Great question. I'd add Purdue to that list of usuals, at least recently. We're keeping Michigan, USC and Navy for sure. I think I would axe either the Spartans or Boilermakers, just so the schedule isn't too Big Ten heavy. As far as adding a yearly foe? One of the best parts of being a student at a big-time college football school is the opportunity to road trip, so let's give Irish students a decent length trip to Knoxville every other year. "The Victory March" and "Rocky Top" are two of the best fight songs, they tailgate on boats and who doesn't love a little southern hospitality? Plus, it would help to keep the pipeline of Volunteer State talent (Harrison Smith and Golden Tate are from there) flowing north.

Well, before attending Notre Dame in 2004, I was not an Irish fan like so many of my classmates, so I don't have any great war stories to tell you from back in the 90's. My favorite Notre Dame game of all-time is also my favorite live experience at any game and, coincidentally, one of the worst moments of my life: USC in 2005. I'm not sure I can express how nerve-wracking the entire game was (we had a short-lived halftime lead). It was terrifying every time Reggie Bush touched the ball, exhilarating when Brady Quinn put on a perfect go-ahead drive and then completely heart-wrenching when Leinart pirouetted into the end zone. I've also had a great time on road trips to Georgia Tech and Penn State (Saturday's game against Navy up in Baltimore was fun, too), and the whole Sugar Bowl experience, even though we didn't have a prayer against LSU, was amazing.

Word is that ND assistant Rob Ianello is a candidate for the SU job. He's a relatively unknown quantity to SU fans. What can you tell us about him?

He's not exactly a known quantity at Notre Dame either, although you'll be comforted to know that as the last few seasons of relative sadness have transpired, Ianello's name is one of the few that hasn't been offered up to the chopping block. Word is he's a better recruiter than coach, but people say that about guys like Mack Brown, too. Since he's got to Notre Dame, he's produced monster seasons from Jeff Samardzija, Maurice Stovall, Rhema McKnight and is currently putting together an all-star depth chart for next season, adding Shaquelle Evans to the likes of Golden Tate, Michael Floyd, Duval Kamara and Deion Walker. He's a top-notch recruiter, but I'm not sure the Orange should gamble on a guy at head coach who has never even been a coordinator before.

If you went on where they went in the draft, overall passing statistics and dreamy good looks, you'd have to give it to Brady Quinn, whose air show his junior and senior seasons obliterated Irish record books. But your question says 20 years, which just encompasses Tony Rice's tenure. He led the Irish to their last national championship in 1988 (a 12-0 season) before placing fourth in Heisman Trophy voting and winning the Johnny Unitas Golden Arm award in 1989 (a year the Irish went 12-1). We'll say Rice, but this is definitely a win-win situation for whoever gets the second pick.

Irish start off slow, Jimmy throws a pick, Brinkley breaks a long run and the Orange lead after one quarter. A nervous, anxious crowd slowly becomes relaxes as Armando Allen, James Aldridge and Robert Hughes begin plowing through the Orange defense in the third and fourth quarters while the defense tightens up. Irish end up winning by around twenty, just covering the spread, depending on when you got in on the action (not that Rakes condones gambling in any form. . .)

Agreed.  I abhor gambling in all it's many forms.  But I do not abhor Rakes of Mallow so keep an eye on them for any last minute news about the Irish or the game.  Thanks again to Chris.