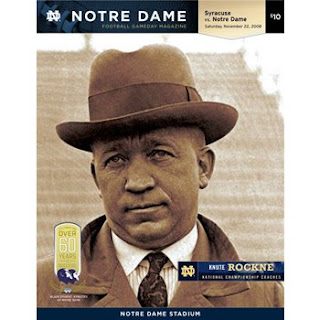 SU squares off against Notre Dame in the Carbon-Neutral Bowl this weekend. I'd love to give a ton of insight into the Notre Dame psyche but I don't really know much about what's going on over there.  How's Bob Davie doing?

That's why I thought Josh over Subway Domer might be able to help us get up inside the Notre Dame mind and see what we can learn. My Q's and his A's below:

At 6-4, is Notre Dame better than, worse than or exactly where you expected them to be?

I expected a better record, but I am getting pretty much what I expected from this team as far as production goes. I though the Irish would honestly be 8-2 going into this game with losses to MSU and BC. Notre Dame lost those games and two more to North Carolina and Pitt. The Pitt and NC games were definitely ones that ND should have won, but they faded in the 2nd half due to a combination of a less than good running game and the inability to seal the deal in a post Brady Quinn era.

We know the fate of our coach but what about yours?  He's obviously done enough to keep his job but assuming ND finishes with 7 wins this season (before a bowl), what kind of position is Charlie Weis in for next season?

Charlie Weis isn't going anywhere. The Chicago Sun-Times was just trying to sell a few papers and get a few more hits on their website. But, they also struck a chord with those vocal Irish fans that want Weis out for a myriad of reasons. The University likes Weis and believes in him (and there is something about a huge buyout as well). I think he is doing a decent job, but decent doesn't cut it at a place like ND. The good news is that as much improvement as the team has had this year on both sides of the ball, they should have even MORE improvement in 2009. The team is young and stays pretty much intact with more troops on the way. Jon Tenuta and Corwin Brown are changing the culture of the defense and are getting some very good results. I truly believe that the Irish will have at least 11 wins next year. the schedule goes to the 7-4-1 format and the toughest road trips will be to Pitt and Michigan. Some fans are calling for a National Championship, but another BCS bowl is more likely.

At time, Notre Dame's passing attack looks formidable.  At other times, the rushing attack takes the lead. What can Syracuse expect to see on Saturday?

I see that Syracuse is giving up over 200 yards a game rushing and passing, and is allowing almost 34 points a game. After the success ND had running the football against Navy and the fact that Weis is calling the plays, I think you will see a similar attack Saturday as to what ND did against said Navy team. Weis will try to protect Jimmy, especially with the loss of Michael Floyd, with a short passing game. However, I also think that Weis needs and wants a huge game offensively before they go to U$C. That means that the play-calling could be like a one-eyed-jack. Wild. This is what is frustrating to Irish fans- we don't really have an identity on offense other than a really smart guy calls plays for a former 5 star QB. Sometimes it works, sometimes it doesn't. Your guess would be as good as any others.

If Syracuse wants any chance of winning this game, what do they need to do? What is the worst thing Notre Dame can do to put themselves in that position?

If Syracuse can get pressure on Clausen with only a 4 man rush and sit 7 back in coverage they will have a shot at stopping the offense. That of course comes down to the Irish running game which is anything but consistent. On the other side, ND brings a lot of pressure with blitzes. If Syracuse can protect its QB and put together a few drives that end in points in the first half, the second half is where ND has had trouble ALL year.

The worst thing ND can do is keep turning the ball over. In the four losses that ND has had, they have lost the turnover battle 13-4. If you take the Pitt game out of the equation, the ratio goes to 13-1. The simple math that equates a Syracuse in would be to win the turnover battle and turn the gas up in the second half. BTW - Onside kicks work against us if you haven't heard already.

So it sounds like we should get used to each other because we're going to be playing as much as ten more times in the coming seasons. ND was very adamant about getting a series in the shadow of NYC, be it with UConn, Rutgers or Syracuse. Do you like this kind of thinking or feel like it's unnecessary?

I think a neutral site game in New York City where the original term "Subway Alumni" comes from is a good, if not great idea. The other scheduling habits are a little more suspect (VS. Washington State in San Antonio in 2009). I understand what former ND Athletic Director Dr. Kevin White was trying to do with the 7-4-1 format (7 home- 4 away- 1 neutral site), but he was doing it with a skirt on. The neutral site game should be a major venue and not just an exhibition game for alumni and fans in that area. The other problem with neutral site games is that they take the game away from the college atmosphere that help makes college football the greatest sport it is. I like the basic thinking, just not the overall action as yet. Hopefully the new A.D. will be able to spice it up, but that will be some time from now.

Assuming you finish 7-5, what bowl is Notre Dame going to?

At 7-5, Notre Dame will be heading to the Gator Bowl on New Year's Day to face one of about 5 different scenarios of ACC teams. Sounds ridiculous, but the draw of the Notre Dame fanbase is too much for the Gator Bowl to pass. If ND somehow manages to finish 8-4, I heard that the Cotton Bowl may come calling to have ND face a SEC opponent (probably either Georgia or LSU) but I'm not sure how true that scenario may be. If disaster strikes and ND finishes 6-6 they will most likely head to the Sun Bowl to face either Arizona or Cal. 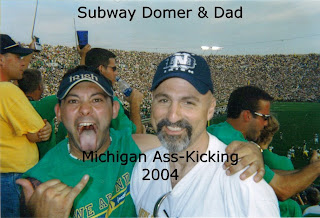 Have you ever seen "Rudy"? (Ed Note: More times than I can count) The scene where they show Rudy's dad walking into the stadium for the first time and he says something like, "This is the most beautiful sight these eyes have ever seen." that's what it is like every time I go to a game which has been on average 3-5 games since 1999. But, the best time, was that first time. It was with my father. It was his first trip inside the stadium and it was an indescribable feeling for me to have a father and son moment like that especially since we were both Subway Alumni. 1999 (5-7) was not a good year for the Irish, but that game against Oklahoma turned out to be nothing short of spectacular as the Irish came back from a 16 point deficit to beat the Sooners 34-30 in Bob Stoops' first year at Oklahoma. It was just one of those moments.

A close second would have to be the Michigan 2004 game. Fuck Michigan.

Fuck them indeed. Keep an eye on Subway Domer all week for more ND insight, and possibly a return volley of Q&A with yours truly. Thanks to Josh!