Share All sharing options for: The Cuse Blog Wars Just Went To Eleven

During the UConn-Syracuse game, the following quote was added to the GameThread:

The guys on TK99 in Syracuse just said “Superman wears Rob Long underoos.” That might knock off “Troy Nunes is an Absolute Magician” as most ridiculous thing said by someone commentating an SU game.

#1, that's a valid statement.  #2, a discussion then broke out over whether or not someone was actually going to create a blog using that name.  And if you read the links today, you'll know that someone did.

But so did someone else. And so I give you... 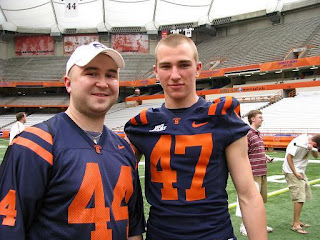 The question now is, can they co-exists?  Or is this going to end like of of those crazy news stories from Korea where someone gets killed cause of something they did in World of Warcraft?  Is this the Ottawa RoughRiders/Saskatchewan Roughriders  of the Syracuse blogosphere?  We've breached the precipice, people.  Where we go from here, well, hell if I know...