Villanova, The Cause Of And Solution To All Of Life's Problems

Share All sharing options for: Villanova, The Cause Of And Solution To All Of Life's Problems

Lots of rumblings and grumblings in Big East Land lately over the fate of the conference and what the appointment of John Marinatto means.  If you're a basketball-first fan, Marinatto represents business-as-usual and a focus on maintaining the long-standing traditions of the conference and keeping the basketball core strong. If you're a football-first kind of person, the appointment might concern you as it's another basketball-first guy who won't really make the  necessary decisions to ensure that Big East football is consistently ahead of the curve.

I was mulling it all over last night (at least I assume I was mulling, I'm not quite sure how one mull's but I', pretty sure I nailed it) and I think I figured it out.  It's all so simple, really.  All we need is for one thing to happen and it will solve everyone's problem and ensure that Big East will have taken the necessary steps to move the football side forward without diluting the basketball side.

We need to convince Villanova to play Division 1-A football. 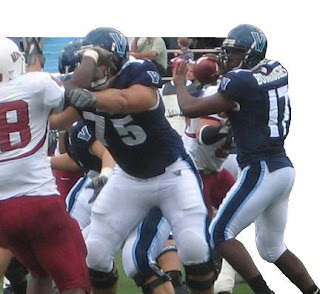 Marinatto is quoted as saying there isn't a school out there right now that works for the conference in terms of expanding to a ninth team.  But a ninth team is vital to the health of the conference as it will allow for 4 & 4 home and away scheduling and, let's face it, the conference need at least one more team to look a little...meatier.

Well if there's no team out there that meets our criteria, let's create one.

We know that the Wildcats have flirted with the idea before but money has been a major sticking point.  Hell, Villanova lost $3 million in 2006 alone just from it's football program.  So in these harsh economic times, the Big East needs to do what any smart, capatalist, survival-of-the-fittest society would do...bail them out.  Let's put together a loan package that Nova can use to upgrade facilities and make the move.

On the field, the Cats are peaking.  They've had a winning season every year since 2006 and they're currently 8-2 this season.  Much in the same position UConn was in when they came up to the Bigs.

The big concern has to be a stadium.  Temple plays their home games at Lincoln Financial Field, home of the Eagles.  Why not work with the Owls to figure out some sort of Giants-Jets scheduling plan so that you can share the stadium on Saturdays?  Surely that'll cut down costs for both parties as well.  Assuming the two teams play each other every year that eliminates one home game concern right there.  Throw in a couple Thursday/Friday night games as well and it really can't  be that hard to split 18 weekends amonst 12-14 home games.

Speaking of UConn, if you're worried that the Wildcats would just be the new doormats, look to the Huskies.  The Huskies went from 1-AA to 1-A in 2000.  In a matter of 7 years they had a share of the Big East Conference crown.  And don't forget South Florida.  They didn't even exist until 1997.  Ten years later they got all the way up to #2 in the country.  So things can happen pretty quickly for a program with the right personel and recruits.

The worry about attracting a Memphis or an East Carolina is that we're going to have to take on their basketball program and add it to an already overstuffed league.  At 16-teams the Big East is at it's max already and some would argue it passed it about three or four teams ago.  That said, 16 is a nice perfect number.  It allows the conference to make the Big East Tournament into a mini-NCAA Tourney without leaving anyone out.  A 17th team would cause headaches and only add to the scheduling nightmare that is Big East basketball.

But Villanova's already a basketball team.  No changes, no alterations, no issues.  No muss, no fuss!

#3 - Big East Football Gets Philly Back

The one saving grace that Temple had during it's time in the Big East was that it brought Philadelphia to the table.  At the time, the Big East had a presence in every major city in the Northeast (Boston, Philly, Pittsburgh and NYC kinda).  When BC left, they took the lucrative Boston market (heehee) with it.  And when we booted Philly, so went that city as well.  We'd love to get either of them back if we could.

Yes, technically Rutgers is NYC's college football team but it's really more a relationship of convienence.  They're NYC's adopted college football team. They light the Empire State Building up scarlet red when it's a big game, sure.  But you can be sure that no New Yorkers are getting up at 8am on a Saturday to make the drive down to New Brunswick.

Philadelphia is a Big East market and it needs to be represented in the conference.  Rutgers cannot be all things to all people and it's already a stretch to consider it NYC's team.  There's no way they're close enough to curry favor in Philly.

Taking on Villanova solves the entire problem.  Philadelphia instantly returns to the conference and provides the Wildcats will a plethora of (pinatas) new and exciting scheduling options.  Rutgers isn't THAT far away...about an 90 minute drive, give or take.  The rivalry with Pittsburgh will blossom fairly quickly.  If they're smart they'd schedule Temple every year and create an in-city rivalry.  And if they're feeling especially audacious, bring on the Nittany Lions, although be prepared to play over there a helluva lot more than you play at home.

I know, it's not something like this can happen overnight.  But if the Big East was smart, they'd be working on a way to get this ball rolling again ASAP.  Otherwise, we're going to be forced to do something we don't want to do eventually...much to East Carolina's delight.