The Day After Tomorrow

Share All sharing options for: The Day After Tomorrow 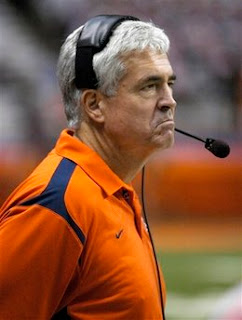 Bit of a busy day yesterday in the Salt City.  Yes there was a basketball game and the field hockey team done did good, but let's face it those are secondary stories for the moment.

The reaction to Greg Robinson's firing has been wide and, for the most part, understanding.  Forst and foremost though, it's worth noting the comments from the firee himself.

You can watch his press conference here or you can read the transcript here.  I decided not to engage in any Gregisms shenanigans today since there really wasn't much to go on and, to be fair, Greggers really is a nice guy and now that the deed is done I think he can have a day where we call off the dogs.  Only a day though...

Plus, watching that press conference, you get the sense you're FINALLY seeing an actual human being talking.  Refreshing, albeit too late.

As I've said before, if you take a step back and put yourself in his shoes, you gotta feel bad for the guy.  He's spent the last 20-something years of his life building towards the dream of being a head coach on a prominent level.  He achieved his dream.  He reached his goal.  And in a matter of years, it ended in utter disaster.  Not only will Greg never be a head coach again but he leaves this job with a stink that will never wash away.  For the foreseeable future his name will be synonymous with failure to Syracuse fans and to college football fans in general.  He will have other jobs and have the chance to redeem himself in some aspect, but he will never have the chance to make-good on the last four years.

I say all of that not to bury the guy any further than he already is, but just to point out the Greek tragedy aspect of Greg's career.  We all have that one thing we hope to do with our lives one day and would give anything to do it.  Greg got that chance and it was a nightmare and he got it too late in life to reverse it later on.  His legacy, at least in Upstate New York, is set in stone.  At least Coach P apologists will always be able to point to his record.  Coach Robinson apologists have no such luxury.  IN fact, there's no such thing as a Coach Robinson apologist.  That's how bad it's been.

That sentiment, that Greg was, if nothing else, a bad coach but a good dude, is being echoed today by Jim Boeheim, Donnie Webb and Bud Poliquin.  Of course, Poliquin takes it a liiiiitle too far:

His only flaw, and it's a big one when you're being paid $1.1 million a year to win football games, is that he hasn't won nearly enough football games while guiding the Orange through these past 45 games.

Only flaw?   ONLY FLAW, BUD? C'mon now...I know you're close to the guy and you want to make sure the guy is painted in a good light amid all the bashing...but be honest with yourself and with the fans.  Robinson's fatal flaws as a head coach were many...hence the reason we're here.

We can't possibly move forward without discussing Daryl Gross' oddball choice to host the announcement in his office rather than in the conference room.  Seriously, he did this.  Here's proof:

Leaning back in his chair, moving from side to side, legs spread...Gross is a king holding court.  Just...weird.

Gross does say that now the Orange get the chance to do the coaching search right.  And while we won't get the "first draft pick" that Gross once said we would due to the other high-profile jobs out there, we should at least be able to get some offers out to the guys we want coaching our team.

So who are these guys?  Donnie Webb specifically zeroes in on three guuys:  Randy Edsall, Skip Holtz and Lane Kiffin.  Sorry but I don't think we have a shot at Kiffin.  No way we can out-sell Clemson or Washington on Kiffin, despite the Gross ties.  As for Holtz, the once-untouchable is now very-touchable (ahem) and Gross has inroads with Papa Holtz already.

But obviously Edsall is prime target #1 right now.  Randy certainly made a good impressions this weekend when his Huskies dominated the Orange.  He continues to deny interest but if you look closely he never really shuts the door on the option...just kinda does the "I'm not interested" dance that so many coaches have done before him before taking the job.  One local reporter even calls Edsall out for his constant job shopping and says Good Riddance.

There's also Turner Gill (who officially turned Buffalo into a bowl team this weekend), Boise State's Chris Peterson (who Gross has a connection to) and Illinois OC Mike Locksley and others.  You can probably stop with the Mike Leach talk right now...that's sillytalk to even think he'd come here.  But as for the others...fair game for now.

Make sure you check out The Axeman's take on the whole situation.  ESPN's Brian Bennett talks about how Robinson was always a bad fit for the Orange.  The Three Idiots celebrate V-G Day.  Orange Fizz recaps the whole sordid affair.

No one's updated Greg's Wikipedia page yet.  Get on that, will ya?