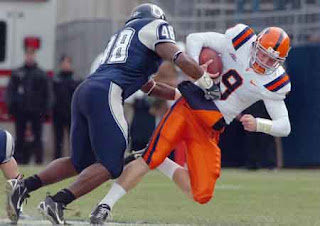 Team: UConn
Record: (6-3, 2-2)
Last Game: L 13-35 WVU
This Week: Us
How Fucked Are We?: More fucked than it would seem on paper.  Sure, the Huskies don't know who they'll be throwing out there at QB against us and sure it's senior day and Syracuse's last home game and sure it's probably Greg Robinson's last home game so there's emotions there (I feel it.  I really do.) But UConn has Donald Brown who, when not tackled, is very good.  And we can't tackle.  So there's that.  Plus, Greg's gotta go out in style, right?

This Week: Navy
How Fucked Are We?: Probably more fucked than you think.  Notre Dame is going to lose to USC in a few weeks so they've only got two shots to get that all-important sixth win.  Navy's not shabby at 6-3 and now that they've broken the streak, it's a fair fight.  That leaves us as the sacrificial lamb to the Irish's Bowl Eligibility Gods.  Plus, they're honoring Knute Rockne that weekend.  No way they lose to lowly Syracuse then.

Team: Cincinnati
Record: (7-2, 3-1)
Last Game: W 26-23 WVU
This Week: @ Louisville
How Fucked Are We?: To paraphrase David Cross, we fucked in the eyehoe, the earhole and make a new hole in us so the Bearcats can fuck us there!  Cincy will at best be playing for the Big East crown and a BCS bid and at worst playing for bowl seeding, so they will be coming to play.  It's home, their fans are excited about the season...2008 will end pretty much the way it started.  With disappointment.