Every regular-season Syracuse basketball game, ranked from least important to most.

29. Long Beach State (Dec. 13) - Two years removed from an NCAA Tourney spot, the 49ers hit rock bottom last season at 6-25.  They'll be better this season, but not so much that the Orange should have problems.

28. Richmond (Nov. 18) - The Spiders, who have a bit of history with the Orange, are coming off a 16-15 season.  They lost their best player and much of their frontcourt last season and while they should be able to run with the Orange, they're just not much of a threat.

27. Colgate (Dec. 1) - In the offseason, Raider fans were giddy for what was looking like a Patriot League contender.  Then star guard Kyle Roemer got bit by the ACL bug, sending the team into flux.  The Orange have beaten the Raiders 41-straight times.  Here comes 42.

26. Coppin State (Dec 22) - Coppin State started last season horrible but got hot just in time to win their conference tourney and sneak into the NCAAs with a losing record.  They lose most of their major players from that team and they have a brutal early-season schedule.  The only thing working in their favor is that they might catch the Orange still recuperating from their trip to Memphis two days prior.

25. Oakland (Nov. 21) - The Grizzlies finished 17-14 last season and seven of their top eight scorers are back.  Combined with a quality recruiting class, the Michigan school has the potential to be frisky in their meeting with the Orange, who could get caught looking ahead to Florida.

23. Virginia (Nov. 28) - Virginia is coming off a disapponting 17-16 season that included a 68-70 loss to Cuse in Virginia. Sean Singletary is gone now and if Jeff Jones can't lift the Cavs up, this season may be worse.  The Orange should win this one at home.

22. Rutgers (Jan. 10) - There's something about the RAC that just scares Orange fans.  It doesn't enough credit as a tough place to play.  Of course, it would be scarier if the Scarlet Knights were any good.  They're not.

21. South Florida (Jan. 2) - The first road Big East game of the season sends the Orange back to the scene of a 78-89 loss last season.  Gone is the big reason, Kentrell Gransberry, who neutralized Arinze.  The Orange SHOULD win this but you never know.

20. DePaul (Jan. 7) - DePaul missed the BET last season and while they should be slightly improved they won't be much of a threat in the league this year either.

19. Cornell (Dec. 3) - Coming off an Ivy League crown and an NCAA Tourney appearance, the Big Red are poised for bigger things.  They return a ton of talent and the smart money is on them going back to the NCAAs.  This would be a nice win for the Orange's resume.

18. Rutgers (Mar. 3) - A home game against the Scarlet Knights this late in the season is a welcome sight.

17. Seton Hall (Dec 30) - The Orange get the medicore Pirates at home for their first Big East game of the season.  Hall started last season hot but took a nosedive to end the year, barely squeezing into the BET.  Should be a nice win to start the Big East campaign for the Orange.

16. West Virginia (Feb 4) - Bob Huggins led the Mountaineers to the NCAA Tourney last season.  But with some major losses and a talented but very young base, the 'Neers might swap places with the Orange this season.

15. Providence (Jan. 28) - The Friars underacheived to a 15-16 record last year but new coach Keno Davis has a knack for quick turnarounds.  Could be a trap game on the heels of the Louisville game.

14. Cleveland State (Dec 15) - This one's got trouble written all over it.  The Vikings should take over for Butler this year as the Horizon champs. Seniors J'Nathan Bullock and Cedric Jackson could give the Orange fits.  This is no gimme.  A loss here sends the message that this is the same old Orange team.

13. Cincinnati (Mar. 1) - The Bearcats aren't all that good, but at this point in the season every win is magnified tenfold.  The Orange can't afford a loss here.

11. Kansas/Washington (Nov. 25) - We won't know who the Orange will face in this game until a winner between them is decided.  If it's Washington, forget about last season's 16-17 squad.  This is a tourney team again.  They may just defeat the defending national champs, who got courtesy-ranked at #24.  Kansas is depleted and young, their rebuilding begins now.

10. Villanova (Feb. 22) - I'm not saying someone shoud kneecap Scottie Reynolds before this game, but if someone did, I wouldn't say anything.

9. Florida (Nov. 24) - After back-to-back titles, the Gators dipped last season to a 12-loss NIT season.  But they're back and nationally-ranked (19th in AP) .  They're not the powerhouse they were a few years back but this is a quality team.  The Orange have their hands full.  A win here is a great resume bullet point.

8. Pittsburgh (Jan 19) - The start of another grueling week for the Orange, the Panthers will be their third-straight ranked opponent (at least as of now). Ranked #5 by the AP, the Panthers are once again a top contender for the Big East.

7. Notre Dame (Jan. 17) - What is about Notre Dame that they seem to have our number?  They beat us in the Dome last year and this team's even better.  Ranked 10th to start the season, Two words: Luke Harangody. 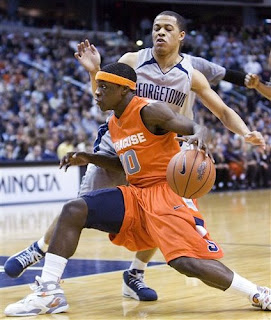 6. Marquette (Mar. 7) - The final Big East game of the regular season.  I don't know how good the Golden Eagles will be then (probably pretty good) but something tells me that a win here is going to be crucial for the Orange.

5. UConn (Feb. 11) - The Orange only get the Huskies once and it's in Connecticut.  They're, um, good.  And even better at home where their fans, um, dislike us.

4. Georgetown (Jan. 14) - This could be the first time in recent memory when the Hoyas and Orange take the court both as ranked teams (anyone?).  The Hoyas are coming off a disappointing NCAA Tourney loss to Davidson.  Despite some major losses (Hibbert and Ewing, Jr.), these is still a solid team and they're on their turf.

3. Louisville (Jan 25) - Many are picking Pitino's Cardinals to win the National Title or, at the very least, earn a #1 seed.  But this is a great opportunity for the Orange.  They get them at home on a Sunday...the Dome will be rockin'.  A win here is ha-yuge.

2. Georgetown (Feb. 14) - This could be payback at home for a loss at Georgetown.  I don't have to tell any SU fan how crazed the Dome is when the Hoyas come to town.  Anticipate court-storming.

1. Memphis (Dec. 20) - A road OOC game against a ranked team?  We can do this?  Last year's Runner-Up lost a lot of talent but has plenty left over to make another run at the CUSA crown and more.  With more than a month under their belt and just before Big East play starts, this will be the Orange's ultimate barometer game and will set the tone for expectations all season long.