Orange44 Is An Absolute Magician 17.0

Share All sharing options for: Orange44 Is An Absolute Magician 17.0

Every week, Brian Harrison of the esteemed Syracuse blog Orange44 and I trade Q&A's to find out exactly what each other thinks about the current state of SU sports.  This week, I asked, he answered: 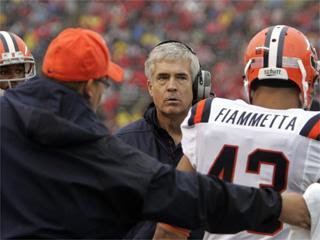 When the first quarter ended in the SU-Rutgers game, did you feel like this was for real or did that nagging sensation that it was going to be a brief lead creep in?

Yeah, this week I was fooled.  I thought that it was going to be hard for Rutgers to come back so easily on a 14 point deficit, especially when they have been so hot and cold this season.  Also, absolutely NOTHING was going Rutgers' way in the first quarter, so you had to feel like it was Syracuse's game to lose.  Sure enough they did not disappoint.  It was not until the middle of the second quarter that I knew it was not going to end well.  Rutgers gained all the momentum back, and the offense stalled more times than a 1972 Gremlin.  Syracuse once again failed to make any meaningful impact on the scoreboard in the second half, and Rutgers looked night and day better coming out of the locker room.

Seriously, it's the ninth game of the season, is someone going to teach these guys how to tackle?

Not convinced that the "Thud Drills" make an impact?  Me neither.  It can only be one of three possibilities:

(1) Syracuse simply does not have any talent on defense.

(2) Syracuse coaches are failing to teach how to tackle properly.

(3) Syracuse coaches teach how to tackle properly but players ignore this.

I do not believe that it is possibility number one.  These players have shown the ability to make tackles in the open field and show decent run defense.  So I simply do not believe these guys are incapable of tackling properly.

Instinct is important to a defensive player, and these kids just seem to react poorly to whatever the offense gives them.  It is painfully obvious that if a running back is running full speed an arm tackle will not stop your grandmother.  You have to either take out his legs or simply hit him straight on and wrap him up, or at the very least slow him down enough to have a teammate help you.  Something is not connecting with these guys.

Either way, the scariest part is they are not learning from week to week, game film to game film, and making the same mistakes every time.  It is sad and scary.  Either way, no matter what the problem is, poor tackling decreases the chance of winning any game.

Doug Hogue has SU's longest running TD in fifty years and then never gets another carry.  Wudupwitdat?

Yeah, I was scratching my head at it too.  There just felt like a general lack of commitment to the run, even after that 82 yard gem that Hogue dialed up.  When your main running back Curtis Brinkley has five 100+ rushing games in a row, wouldn't you hand him the ball and run him until Rutgers could show they could stop him?  I know I would.  Because that is smart, traditional football.  And it works.  Then, especially after Hogue demonstrated that he can make a run like that, why would you not give him more touches and mix it up with resting Brinkley and giving a two running back set for the defense of Rutgers to chew on?  These are the questions that Syracuse fans deserve answers to.

Assuming SU loses to UConn, will we finally get the announcement afterwards that Greg will be fired at the end of the season?  Or are they seriously going to drag this out until the end?

I get the feeling that this is just going to drag, to the detriment of the program.  DOCTOR Gross and this department are so stubborn that they are actually going to give this guy the whole season to take the reputation of the program even further than it has already been.  The sooner we make a commitment to finding a new coach, the sooner we can actually find that coach, a coach that will be quality and not someone that a better program decided not to pick, and recruiting can be reestablished.

However, if they were going to do it, it would be the best time at this point to do it after the UConn game.  Seeing as UConn is Senior Day, as well as the last home game, pressure will be off the University to have the kids on the team be committed to their head coach.  We are finally officially already out of Bowl contention.  On top of the fact that basketball starts the next week, so attention will be on that instead of the whole coaching/football situation for the most part.  It is time for Syracuse to seize the day Newsies style and fire the worst head football coach in the illustrious history of Syracuse Football.

Switching gears to basketball...do you take anything away from SU's two sluggish exhibition performances or are they really just glorified practices?

They are absolutely glorified practices and you should take nothing away from the spread of victory that Syracuse earned in either game.  Boeheim played almost all man-to-man defense in these games.  Boeheim also tried numerous combinations of players on the court, as well as walk-ons and freshmen.  This was not a game, rather a contest played under official conditions, between inferior opponents with the goal to see what could possibly work, and what will not.

While I like that Boeheim has the kids really trying to learn proper man-to-man defense, I think we all know that this is not the bread and butter of the Syracuse program.  Will Boeheim be playing any more than seven or eight players consistently?  Probably not.  He will stick to the very best players and milk them as much as he can.  Boeheim and the staff, and probably even the players, do not look at these games as serious contests, but rather experiments with which there is no fear of failure, nor is there a concern for anything but proper fundamentals, team chemistry, and avoiding injury.  I wouldn't put any stock in these, except to raise your excitement for how good this team could possibly be this season.

\Who do you expect to lead the Orange in scoring?

Really, it could be any number of players.  I could see Eric Devendorf or Paul Harris making a run for the title.  However, my gut tells me that it will consistently be Arinze Onuaku.  He only averaged 12.7 ppg last season, but last year was "The Donte Greene Show" basically.  He shot the ball a lot, and other players for Syracuse didn't.  This year I think there will be a more concerted effort to get Onuaku the ball and earn high percentage shots from close to the basket.  He will also be in the game a lot for his rebounding and defensive abilities, which we will surely need in the Big East slate.  If he manages to stay out of foul trouble, I think he can make a huge impact for this team.

Much like establishing the running game in football, it is important for Syracuse to establish his ability to score from inside.  This will then open up passing lanes which will allow that extra pass for an open shot or a man cutting to the basket.  The entire offense will get better when Onuaku is playing this season.  The same could not be said for Greene last year.

Potpourri question...if the Big East Conference folded tomorrow, where would you rather go...the ACC or the Big Ten?

Both my gut and my head say choose the Big Ten.  This is for several practical reasons.

First, geographically it makes more sense for our school to pick them.  It would cut down on travel cost and time.  Also, this could allow for other regional rivalries to form.  Also, the Big Ten is a good football conference and a great basketball conference.  It would be fun to see Syracuse match up against the likes of Illinois, Ohio State, and Michigan State on a regular basis.  Also, in football, it would allow the Big (11) Ten the ability to have a conference championship, which brings extra revenue to the conference and Syracuse.

The ACC would be fun to join because of the old Big East connection, and the fact that I would love to see Syracuse beat those ACC teams in basketball on a regular basis.  However, it just makes more sense for Syracuse to go with the Big Ten.

Thanks as always to Brian.  No self-respecting Syracuse fan goes a day without checking Orange44.  I suggest neither should you.