Greg Robinson will be out of a job at some point this month. It might be this Sunday, it might not be until November 30th, it might be some time in-between. But rest assured, it will happen. And whether he wants to publicly come to terms with it or not, Greg knows. 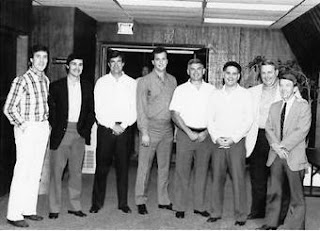 You might be wondering if Greg is busy polishing his resume in preparation for his impending job status. I mean, in today's economy, it's just not a good time to be out of a job so you better put our best foot forward. But there's one thing you need to remember about Greg that will ensure he'll be just fine once this whole Syracuse thing is over with.

His hiring here at Cuse was thanks in large part to Pete Carroll's thumbs up. Carroll and Robinson coached together at Pacific back in the day. Prior to that Robinson parlayed the kind words of former bosses Dick Vermeil and Mike Shanahan into the Texas DC job and added Mack Brown to his list of supporters. That list of vouchers also includes Terry Donahue and Lions OC Jim Colletto. His lack of recent success aside, any one of these guys seem happy to pick up the phone and sing Greg's praises to the next coach interested in hiring him.

So who will it be? The chances of Greg getting a head coaching job anywhere are 0.0 and the chances that he'd even get a DC position at the NFL or D-1A level are just as slim. Chances are he's gonna have to go the Coach P route and look for a assistant coaching gig to get back on his feet...maybe as a D-line or linebacker coach. Even in the face of his Syracuse defense's horrific stats, he can get a gig at this level based on the kind words of his backers.

I actually think he's got a better shot at an NFL gig than college. His name is poison in the college game at the moment and I can't imagine any program getting excited about seeing him in the papers. But the NFL loves college coaching pariahs, as it's full of many of them who already received their second chances. And even though it's been a decade since he won them, Greg still has two Super Bowl rings on his hand. That counts for something in the NFL.

There's no way he could go to Denver or Kansas City as he was run out of town by both teams. But what about the Detroit Lions? They're sure to clean house this off-season. And if Colletto somehow manages to keep his job, you can bet he'll be putting in the good word for his friend and fellow Pacific U coach.

Dick Vermeil is no longer a head coach but he commands much respect around the league, where many of his disciples coach. Recently honored by the Rams by being placed in their Ring of Honor, would Vermeil make a call to the downtrodden St. Louis team to find out if they'd be interested in a coach with two Super Bowl rings? Maybe.

If there any program in Division-1A that might be interested in Robinson's services, it could be UCLA. Greg coached at UCLA from '82-'89 in various positions under Terry Donahue. He's from Los Angeles and will certainly be looking for comfortable surroundings that are as far away from Syracuse as possible. Dick Vermeil is a UCLA guy, as is Jim Colletto. Not to mention the fact that Robinson was once under consideration to be head coach for the Bruins in happier times. Athletic Director Dan Guerrero was the man in charge then and he still is now. It might have been even more likely had Karl Dorrell not been fired after last season. Dorrell was a Shanahan disciple.

I guess you have to throw out the Pete Carroll connection as well then. Would Carroll bring on Greggers as an assistant if the job opened up? Could Robinson actually end up working the sideline across from DOCTOR Gross and the Orange in a couple seasons when SU comes out to LA to play USC? Unlikely, but possible.