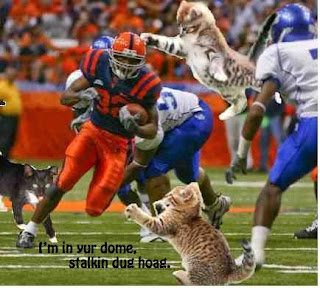 Seriously, do you have a better explanation?

On Saturday, Curtis Brinkley was having a sluggish start to the afternoon. In comes Doug Hogue who proceeds to rip off an 82-yard touchdown run which is the longest of its kind for SU in over 50 years. As an encore, Hogue does...well...nothing. He never gets another carry. Instead, Curtis Brinkley returns to carrying the workload but never really breaks out. He finishes with 67 yards on 18 carries, his worst performance in more than a month.

Hogue would also contribute a 12-yard reception later in the day, which led all receivers FYI, giving him 104 yards of total offense and a TD. In a day when SU was scrambling to find positives, Hogue was a shining example of one. Naturally, Greg Robinson didn't mention Hogue once in his press conference.

So what gives? Couple this with the fact that Hogue's opportunities have severely diminished since the beginning of the season, clearly something's going on behind the scenes that has influenced Greg Robinson into keeping Doug Hogue off the field and certainly out of his post-game sentiments. Since the Northeastern game, in which Hogue carried the ball 16 times for 100 yards, Hogue has a grand total of five carries. He didn't get one carry in the West Virginia, South Florida or Louisville games. In fact, that touchdown run was his first carry in a month. All of this despite the fact that he has had no discernible injuries and, at least not publicly, no suspensions.

Now there were a lot of rumors floating around the message board a while back that Hogue actually was on some sort of probation for an unspecified misdeed. Nothing was ever confirmed but it seems like even if he wasn't suspended, clearly Hogue rubbed Robinson the wrong way at some point and he's still paying for it, at the expense of the SU running game.

Even when he's running on all cylinders, Curtis Brinkley benefits from having Doug Hogue in the line-up. Moreso that Antwon Bailey who is still getting his legs under him. So for Robinson to go this far out of his way to keep Hogue off the field must mean something bad went down behind-the-scenes. Question is...what?